Content Warning: This article discusses various experiences of fertility including both miscarriage and pregnancy.

God blessed them, and God said to them, “Be fruitful and multiply, and fill the earth and subdue it; and have dominion over the fish of the sea and over the birds of the air and over every living thing that moves upon the earth.”– Genesis 1:27-28 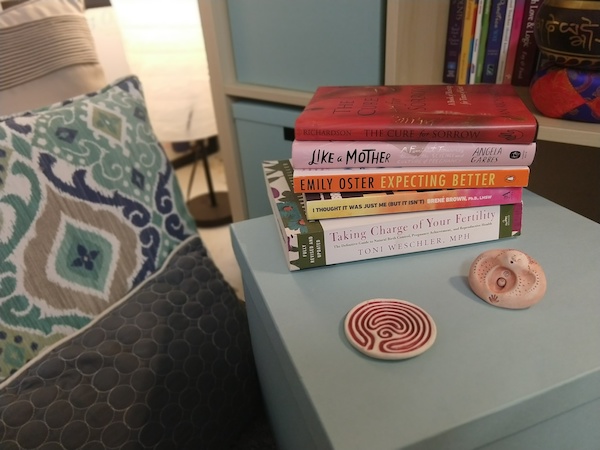 Both myth-debunking research and deep spiritual truths from powerful authors created space for the author’s journey; and shared space in her basement meditation corner.

From the very first time the concept of sex entered my understanding, I was made to believe that having sex = getting pregnant. I couldn’t tell you exactly where that myth came from. Maybe it was my own culturally-informed reading of the Genesis passage (Sex was for procreation and maybe for pleasure if I was married), but don’t think I’m alone in having held this myth close to my heart for so long.

Even as I became an adult, went to seminary, and reconciled my understanding and respect for good science with my deeply held beliefs and faith-life: this poorly researched and inadequately thought-through myth persisted. When my husband and I met, and were planning our wedding, I was incredibly concerned with accidental pregnancy; I thought missing a single birth control pill was going to lead to pregnancy and I was going to screw up my whole candidacy and potential ordination process.

Given the enormity of this myth built up in my insides, I was understandably surprised when I went off birth control on purpose during our second year of marriage and… nothing happened. Then, something happened, but it wasn’t what my fertility-myth-laden heart expected. Just before my first early-OB appointment the first time I finally got pregnant, I miscarried. I felt totally alone, like something was wrong with me, as though somehow my body wasn’t doing its God-given job. This potential reality pissed off my little perfectionist over-achiever brain, and made me feel totally ashamed that something in me was broken and not normal.

That’s when my OB/GYN recommended a healthy dose of Brené Brown (seriously, my OB is that awesome) and pointed me toward the book, Taking Charge of Your Fertility, for some good, contextually-researched science on my situation. I was 32 years old. I had considered myself a feminist for much of my young adult life. And yet this was the first time in my life that I was reading information about the science of my biology that matched the lived patterns of my flesh and bones. It turns out, my 26-30-day fluctuating cycle with an overly heavy 7-day period was not something “wrong” with me at all.

“The belief that cycles are 28 days and ovulation occurs on Day 14 is so entrenched in the medical profession that when a woman’s cycles vary from that standard, the variation is often presumed to be a potential concern. “Irregular” cycles are seen as problematic….”  – from Taking Charge of your Fertility

These words felt like Gospel to me. After all, when have I EVER believed that God created with normativity as the goal? As I let these words that felt like God’s YES sink into my bones, my broken heart began to heal around trusting what I already knew to be true but was now unexpectedly embodying in my fertility journey: that God is a God of mystery, a God of change, and a God of detail beyond my human understanding.

When I had a second miscarriage requiring a D&C, this new spiritual space didn’t make the pain any easier, but it did ground my grief in something that didn’t need to be so personal. Or at least not so achievement-oriented. It meant I could grieve alongside and with God. It meant I could begin to understand the grief I carried in my gut and womb was holy and part of my whole being, not some struggle separate from God’s desires for my fruitfulness.

The more I read about the actual lived science of fertility, the more it felt like God’s YES was taking new shape in me. It didn’t have to be the literal YES of Mary, Mother of Jesus, for me to feel worthy or enough. (Although I still carried in me a deep longing for that particular YES as well.) It turns out, that geeking out about the science of fertility unlocked a whole new understanding of the Divine Feminine in me. It started with debunking the myth of the 28-day cycle and continued with discovering just how common (read: normal) not getting pregnant at the drop of a hat is, and how common miscarriage is.

The odds of conception for couples who have nailed down for certain when Ovulation Day occurs is just 30% for those who have sex the day before or the day of ovulation. That doesn’t account for mis-measured ovulation for women whose cycles have been marginalized by popular cultural understanding of menstruation. Around 10-15% of pregnancies that are developing normally at 6 weeks end in miscarriage. Ninety percent of miscarriages in the first trimester are a result of chromosomal problems.[i] (Read: beyond my control.)

It seemed like with each new piece of data, I could place my story closer and closer to the center of God’s intention for my female body. Isn’t that what Gospel does? Takes the margins and brings them close-in to God’s divine center?

As my own story unfolded, I soon discovered that the mystery of bearing life was just as fraught with myth as the mystery of fertility. On Christmas Eve 2017, I realized that that month’s 34-day cycle was, in fact, a missed period for a reason. I was pregnant again.  Knowing that my body and the body I now bore in my womb would both reveal their intentions for new life in time, I chose to spend my first trimester and a good chunk of my second carrying this mystery as divine secret as well. It felt like I had some listening to do to what was going on in my insides, and, for all my new-found groundedness, I still somehow harbored the myth that my out-loud declaration of pregnancy might somehow jinx the whole thing. (For irony, see above science on my actual control in the matter.)

Then, once I could no longer keep the divine secret in, I entered a whole new world of myth and mystery. Except this time, the myths seemed external to my experience. Maybe I had done the work of embracing God’s mystery and chaos enough that I stepped into this part of my fertility journey ready to assume that my body didn’t need to “fit-in.” Maybe I had built up a salty layer of resistance to cultural expectations after my struggle with the getting-and-staying-pregnant part of child-bearing. Maybe as a woman pastor who deals with getting weird external expectations and assumptions of her body and being placed on her all the time I was ready to draw the line with my experience of carrying my own child. Regardless, the myths that surround pregnancy were no less rampant. It’s striking to me how much more they are debunked and fought against publicly than the myths of fertility and yet they seem to still take up space; quietly and sometimes passive-aggressively pushing women’s lived experiences to the margins.

It turns out, the myth of the 28-day cycle finds its counterpart in the old-wives tales of pregnancy symptoms. Almost immediately after publicly announcing my pregnancy, I started to get questions—sometimes worded as statements—about how I was feeling. Those who have experienced pregnancy perhaps have encountered these well-meaning but misplaced questions/projections. For me, it made my experience of pregnancy sometimes feel like it lacked relationality.

I realized somewhere along the way that what these exclamations were doing was taking up the space for my story to take its own shape in the narrative of how human life is brought into this world. The comments didn’t feel very sacred or inviting – amid a biological process that I’ve been experiencing as deeply sacred. Additionally, it was overwhelming and kind of sad to me that acquaintances of mine and even sometimes absolute strangers seemed so willing to project an experience that wasn’t mine onto my body, when for so long there had been silence about my body’s story in God’s holy cycle of fertility and creation.

As I write, my son is still wiggling in my womb. I’m waiting—some days impatiently, some days with quiet stillness. I’m carrying in me a story that is unique as the stardust and atoms and chromosomes that have been knit together to form this new life. And I’m still carrying in me the grief and weight and mystery of how my body even found itself in this space of life-bearing mystery. It took some smart humans whose words were grounded in science and research to help me embrace God’s sacred mystery from within, and to dismiss the myths from without that plague the experience of being a body created by God to be woman; in all the vastly unique and divinely mysterious forms Her shape and story might bear.

[i] Data cited was researched by Emily Oster, author, Expecting Better: Why the Conventional Pregnancy Wisdom is Wrong – and What You Really Need to Know. Penguin Books. 2013

Rev. Sara Gross Samuelson is ordained in the Evangelical Lutheran Church in America and is currently on leave from call. She and her husband Josh live in Milwaukie, Oregon, with their dog Copper and are excited to welcome their first child in September of 2018. Sara has a long history working in outdoor ministry, a love for coffee, a healthy pride for the Pacific NW and its outdoor wonderlands, and a complicated relationship with her book-buying habits.

The Importance of Mental Hygiene