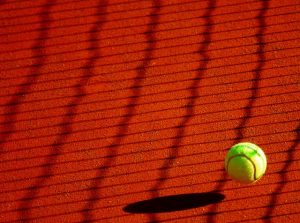 Spiritual agility is a cluster of grit, emotional intelligence, and practice that allows us to respond to our changing realities with strength, speed, and stability.

My middle school tennis coach used to arrange the balls in a small pile at the center of each half-court on occasion. As soon as we approached the courts, we knew the occasion was agility drill day.

As fast as possible, our little, awkward, middle-school legs would go from corner to center, grab a ball, turn quickly, and place the ball in the corner from whence we came. We tripped a few times, as clumsy middle schoolers are sometimes known for doing, but we concentrated on developing our agility: moving with strength, speed, and stability.

My tennis-playing days are pretty much over, but I pastor a church in the 21st century. Last week I was invited by a Bible Study in my congregation to discuss what it is like to be a woman in ordained ministry. They were concluding a study on Romans and startled to discover that, of the 25 saints Paul calls by name in his most famous epistle, ten were women.

“So, what is it like?” the study leader asked.

Well, here we go. I talked about the “stained glass ceiling” and the “glass cliff.” I referenced studies that about the female clergy pay gap and how women make up more than half of all MDiv graduates yet repeatedly serve in positions in which we piece together part-time work, parenting, domestic responsibilities, and/or are relegated to subordinate roles because the church is used to seeing a young, white man when they picture a minister.

AND… when you see us scramble from zumba class to bible study to committee meeting, and when we scrape a sermon together in the gaps before our kids’ parent-teacher conference and a pastoral care visit, you are seeing a miracle at lightning speed. In the 21st century, it’s not realistic for followers of Jesus to simply walk one way down a winding shepherd’s path. Although we may feel clumsy at times, we are participants in the miracle of true 21st century discipleship, traversing a path that is challenging and rarely predictable. We embody the ability to adjust to changing realities and demands with speed, stability, and strength.

As I blurted out all these thoughts and statistics and stared at this group of disciples around the table, I realized the gift of what it means to be a woman in ministry today. I am glad that the church is entrusting the church to young women again. And I am glad that we sisters in Young Clergy Women International and beyond are giving the church, and the world, the gift of spiritual agility.

Spiritual agility is a cluster of grit, emotional intelligence, and practice that allows us to respond to our changing realities with strength, speed, and stability. We already know (thanks, Sally Helgesen!) that corporations are catching on to the gifts women bring because of how we are conditioned to center ourselves around relationships, consensus building, creativity, and inclusion. We bring an advantage to organizations, helping them to moving forward in a faster-paced digital age in which what was true yesterday has a vastly different iteration today.

I believe all the world’s major religious figures and spiritual teachers at some point moved heroically with strength, speed, and agility to adapt their lives completely to a new framework of living.

Jesus was always dropping “truth bombs,” upending the expectations of outside observers. Based on the distinctiveness of personality, needs, and experiences of the ones he was with, Jesus was able to pivot and heal, forgive, exhort, and communicate good news, not generically, but particularly and lovingly.

Buddha practiced spiritual agility when he ventured beyond the palace gate and saw suffering for the first time. It drove him into real, meaningful change that influenced millions beyond the banyan tree.

The church has historically been compared to a ship: out on the seas, a shelter in motion, moved by the Holy Spirit afloat on the unpredictable waters of faith. From my vantage point, however, the institutional church has become an aircraft carrier–often resembling a man-made island asserting its authority and the size of its weapons more than a simple sailboat.

The firmer we dig our heels in to our point of view, our party affiliation, our principles, and our side of every argument, we are not making progress, or participating in sanctification (the process of becoming more like Christ). The result is atrophy: a lack of spiritual agility.

Mother Church, it’s time. It’s time to look to the margins (where Jesus has been calling you to look for a good long while). Behold the women who have cobbled together a life and a calling from almost nothing, and learn from us–from the ways our sidelined positions enable us to see things differently, to turn and adapt more quickly and with greater stability and strength to face the realities that change daily.

My sisters in ministry, this is in an invitation to see the gifts and experiences you’ve had, painful though they may be, as equipping you to lead the church and the world through a whirlwind of change. I give thanks for the amazing bible studies and committees and church leaders out there who want to know how you and I navigate change and conflict, how we seek relevance and engagement with the surrounding culture. Look to the lady in your midst busting her tail to show you that she cares, that she’s got skills and vision, and that you, O church, are in good hands.

Elaine serves as a pastor of First Presbyterian Church, Kerrville, in the Texas Hill Country. She's served churches pastorally throughout Texas since 2012. Elaine holds degrees from Louisville Presbyterian Theological Seminary and Schreiner University. She's currently pursuing a doctorate in preaching while pastoring, mothering two small children, and sharing as simple a life as possible with her spouse and small canine.

Marching for our Lives: Called and Named