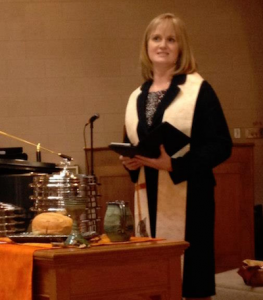 I was a grown-up — and an ordained grown-up at that — before I really noticed that the line between sheep and goats in Matthew 25 isn’t based on responding to an altar call, praying the sinner’s prayer, refraining from bad behaviors or being baptized.

These are all fine responses to the Gospel, of course, but Jesus’ invitation into the Kingdom literally hinges on showing up with food for the hungry, drink for the thirsty, shelter for the stranger, clothes for the naked, tending for the sick and presence to the imprisoned. “Whatever you do for the least of these, you have done it to me.” These are not just fine responses, but, according to Jesus’ own teaching, our necessary and grateful responses to the grace we have received.

These responses to God’s grace are available to everyone, though perhaps not always in exactly the same way. My necessary and grateful response was made available to me by way of a Charlottesville consortium of faith communities inviting their clergy colleagues from around the country to bear witness, provide direct action, non-violent counter-protest, or offer physical, emotional, and spiritual support during a rally of white supremacists in their city on August 12, 2017. I showed up on Friday night, not knowing what to expect. And the resulting 20 hours were full of firsts for me:

Friends, these firsts are my privilege. While it is horribly holy to bear witness to a broken world, it is also a privilege. But, more importantly, I’m aware that my privilege is what allows me to “opt-in.” I get to opt-in to bear witness to violence and intimidation that is not optional for people of color. I get to opt-in to activism that is new to me, but has never been optional for my clergy colleagues of color. As a white, female clergy person, I get to opt in for showing up. To say this is my first time feeling that fear of another person’s hatred — even though it is not directed at me. To say this is my first time gagging for breath on pepper spray and indignation. To say this is my first time to worry about my safety in America not even because I’m in the line of fire but simply because I’m standing next to someone who might be.  That is my privilege.

According to Matthew 25, bearing witness, being present, telling the truth, calling out injustice, praying for peace that is more than ignoring the ugly bits of our history and our world, handing out water, walking someone safely to their car, bandaging wounds in the street, opening the doors of your church, resisting the dehumanization of others — these are not just fine responses to the Gospel but, according to Jesus’ own words, our necessary and grateful responses to the grace we have received. “Come, you who are blessed by my Father; take your inheritance, the kingdom prepared for you since the creation of the world.” (Matthew 25:34)

The Reverend Meg Jenista Kuykendall is pastor at The Washington, DC, Christian Reformed Church, and instructor of preaching through Calvin Theological Seminary's distance learning program.  Meg lives in Washington, DC, with her husband and their three cats.

Out of the Human Heart

The Power of Words
Scroll to top