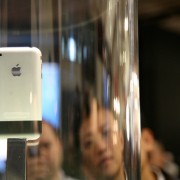 Thinking Twice About My Mac was originally published at  hannahmillerking.blogspot.com. 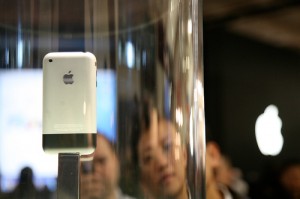 Last week, my husband and I watched a documentary on the history of advertisement (yes, nerd alert. We know it). It was actually more fascinating than I expected, and somewhat surprising in its main point. The argument was that by the late 50’s, “information based” advertising had pretty much run its course– commercials boasting “get the whitest teeth ever!” or “have the cleanest carpet money can buy!” became trite and, frankly, impossible to prove. So marketers switched strategies and instead of informing potential clients as to the actual product, commercials began to sell something else entirely.

The experts learned that what people are really after, what they fundamentally want, is not just whiter teeth or a cleaner carpet: what drives the consumer is a desire for transcendence– a way to understand their lives as having meaning– and a desire to belong to a community. So ads slowly began to adjust accordingly. No longer do beer commercials, for example, tout their great taste or caloric make-up; rather, they show the beer-drinker surrounded by beautiful people living “the good life.” No longer do Chevy commercials ramble on about the specs and perks of having a pick-up truck; now, they depict a father and son finding themselves in the great outdoors, rediscovering the meaning of life together. The idea is if you want that kind of life, you need their product.

Thinking about this phenomenon in advertising, I was a bit shocked at how little to do with actual products this strategy employs, and a bit impressed at how effective it is. I mean, I’ll admit it– I wanted an Apple because it was cool– because I wanted to be part of the community! And yet, one of the interviewees on the documentary shared the ironic reality behind such strategies of branding: “We are selling transcendence and community, and obviously the products we sell can’t really provide that. So people keep shopping.” (Then he laughed.)

As a Christian, the marketing experts’ observations make sense to me: as God’s image bearers, we are created not to live as animals, roaming around just looking for the next meal, but to want to make sense of our lives; to crave transcendence, to find meaning in something bigger than ourselves. And what’s more, as God’s image bearers, created things can’t fill that space. As much as I loved my shiny new iPhone, it is not quite transcendent enough to quiet the longing in my heart. Neither is a beer, or an engagement ring, or the best kitchen HGTV can design. So this documentary affirmed that those longings are real and true and valid– not to be stuffed, ignored, or shamed– but that they can only be found in the One who created me, the Transcendent One, who gives my life meaning and invites me into the community that has been shaped by His love and redemption.

And I hope it will help me to think twice the next time I feel the “need” to shop.

Hannah King is a student at Redeemer Seminary in Dallas, TX. An intern at her church, Hannah plans to enter the ordination process with the Anglican Church upon graduation. She blogs at hannahmillerking.blogspot.com

To Be Separate or Not: That Is the Question