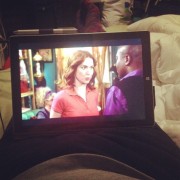 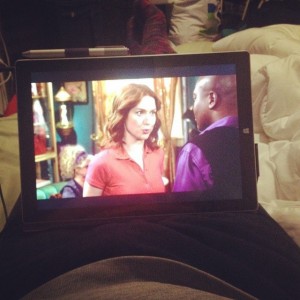 Being a young clergy woman sometimes feels like being a perpetual outsider. We find ourselves new to our congregations, new to our neighborhoods, and unlike most of the people in our clergy gatherings. Even after we’ve had the privilege of serving a congregation for a long time, we may know and love our people, but we are never fully one of the people. We are always slightly disoriented, trying to figure out who we are in our new circumstances, and searching for friends who can understand us and let us be ourselves.

Maybe that is why so many young clergy women seem so taken by The Unbreakable Kimmy Schmidt, a comedy by Tina Fey and Robert Carlock, creators of 30 Rock.

Unbreakable centers on Kimmy, a sunny mid-westerner played to perfection by Ellie Kemper. Kimmy was one of the “Indiana Mole Women,” kidnapped and held in a bunker for fifteen years. After her rescue, she is interviewed on The Today Show in New York City, and decides to stay in New York instead of traveling back home to Indiana, where her identity is defined by her kidnapping. In New York, she can start fresh and build a life on her terms.

Kimmy is an outsider, not only of place, but of time. Her clothes and cultural references are firmly rooted in the late nineties. In fact, the show is populated with outsiders. Tituss Burgess plays Titus, Kimmy’s roommate, an actor who never quite gets a break. The great Karol Kane is their loopy, paranoid landlady. Kimmy takes a job as the personal assistant to Jane Krakowski’s trophy wife, Jacqueline Voorhees, who experiences both the shallowness and the grief of an isolated wealthy woman. Kimmy starts to form bonds with these characters, and together they become unlikely friends. The strength of this hodgepodge community helps Kimmy face her past, transform the relationships she has with the other Mole Women, and finally face her captor in court.

The cast is fairly diverse, or at least the characters are supposed to be. (Jane Krakowski is not the most believable Native American ever portrayed on screen.) This emphasizes themes of outsiders figuring out how to belong, but not everyone has been comfortable with either the Native American story line or the story line about Dong Nguyen, a Vietnamese immigrant who is a potential love interest for Kimmy. Does his fear of the INS and job at a Chinese restaurant reinforce stereotypes or play with stereotypes we already have? (Kat Chow of NPR has a fascinating reflection on this.)

Of course, because this is a Carlock and Fey production, all of this intensity is leavened by joke after joke. Titus (a black man) finds New Yorkers treat him more generously when he is dressed as a terrifying werewolf than when he dresses like himself. Jacqueline’s dog is a breed that has had the poop literally bred out of them. Even Kimmy’s experience of being held in a bunker becomes the source of comedy. She ends up finding some of the coping skills she learned in captivity helpful to process ordinary life. (I may be guilty of testing out her method of jumping up and down and shouting “I’m not here! I’m not here!” as one way to cope with unpleasantness.) Kimmy is optimistic, but not stupid. She is naïve, but canny. We root for her, as do the writers of the show.

And through Kimmy’s optimism and stubbornness, even her outsider friends start to think more deeply about their own identities and take courageous steps. Titus auditions for more roles; Jacqueline divorces her unfaithful husband; Dong and Kimmy both work toward earning their GED.

Kimmy shows us fellow outsiders how to begin to be connected to those around us, even if we don’t belong, even if we will never fully belong. No one except her fellow former captives will ever fully relate to Kimmy, but she does not let that stop her from reaching out and creating a place for herself in her community. Maybe her courage and enthusiasm will encourage us to actually turn off Netflix and go out and make a life for ourselves wherever God has led us.

Sarah Kinney Gaventa is the associate rector at St. Paul's Episcopal Church in Ivy, Virginia.  When she's not binging television shows on Netflix, she is spending time with her husband, Presbyterian pastor Matt Gaventa, and their son, Charlie.