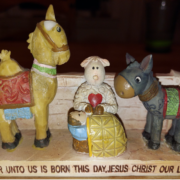 “You have to put the baby down somewhere”
A Sermon for Port Royal Baptist Church
Christmas Morning 2016; Year A
Luke 2; Titus 2:11-14

Hiking, working in the field all day, mowing the lawn, weeding the garden: Humans are able to do a surprising number of things while holding babies. 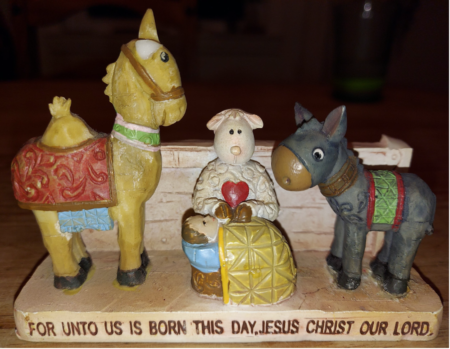 A mostly broken animal nativity set that manages to stay in use each year in the author’s house. Here, baby Jesus naps under the kneeling adoration of a lamb while a donkey and camel approach to pay him homage.

All these things have been done either holding a baby or with a baby strapped on somehow. Did I mention carrying 70 or so pounds of firewood? I’ve seen it done.

You can hold a baby while doing almost anything, if you have to.

But sooner or later, you have to put the baby down somewhere.

You can’t hold them all the time. And sometimes that place is going to be less than ideal:

These are all some less-than-ideal places that babies have been put down, and I am sure you can think of a few more.

I had help with this list. I surveyed a group of clergywomen, and they had lots to say about where they slept when they were born, where their older relatives were placed as infants. (The shoebox on the oven door was with premature triplets, and I’m told dresser drawers were pretty common once upon a time.) They had long lists of places they’ve had to put babies down that were less than ideal.

Humans can do an astounding number of things while holding babies. But sooner or later, you have to put the baby down somewhere.

And so did Mary and Joseph.

“In a manger,” Luke’s Gospel says, “because there was no room for them in the inn.”

That little word there, did you catch it?

The manger was less-than-ideal, no question. We know that because the narrator had to mention a reason why the Lord of All was laid in a manger.

From the beginning, the Holy Family had to explain why it was that Jesus was put down in a less-than-ideal spot. There was no good spot. And sometimes there isn’t.

That’s how a baby spends her first night in a laundry basket: “because my parents couldn’t figure out the crib.”

That’s how a baby rides in a cardboard box in the back seat on a trip: “because we didn’t have car seats back then.”

That’s how a baby sits in a Johnny Jumper in the bathroom doorway: “because I hadn’t had a shower in days and days.”

The Savior, which is Christ the Lord, was sleeping in a manger: because there was no better place for him, no matter what his loving family might have wanted and needed.

And so Mary wrapped Jesus up and put him down into a feeding trough, a less than ideal, less than appropriate place.

Jesus was brought into this world, carried and held and adored, but eventually someone had to put him somewhere.

The Maker of All Things, who is quite comfortable with Jesus being among “all the things,” finally put the baby down into a family, into a particular place on this earth, in a particular time, one as scary as that public restroom floor and moreso.

God put the baby down in the midst of a hopeless political situation: a paranoid king, a Caesar who wants his subjects counted.

God put the baby down into a family where he was born in transit and eventually rushed off to Egypt as they fled for their lives.

God put the baby down into the arms of a person who had never been a parent before, into a people who had suffered religious ruin over and over and over again.

God Almighty put the baby down into a poor family, a family who could only afford to sacrifice a pair of doves in honor of his birth rather than the lamb richer people could give.

Because you can do a lot while holding a baby, but eventually you’ve got to put the baby down somewhere.

Jesus, the one who is called Emmanuel, God with Us, was put down among us, less-than-ideal though we are, in-desperate-need-of-redemption though we are.

And we have been carrying Emmanuel with us ever since.

We need to hold Jesus with us, among us, and cherish the life born into us in the person of Jesus the Messiah.

But sooner or later, we too will have to put the baby down somewhere.

Into the place of our short tempers, onto that broken relationship with an extended family member, between you and someone who hurts you, among the bad habits we just can’t give up, onto the ruin of some part of our lives. Somewhere less than ideal.

We have to carry Jesus while doing the strangest things in this world. And we have to put him down, that mystery of God which has been revealed to us, into the midst of our personal and collective failures, into the danger of this world, into the wild recesses of our hearts.

And you know what?

That’s just what Jesus came for.
To redeem all the places.
All the things.
All the people.

But this child, this small but growing presence of God, is hardy, and good, and strong. This child is named Jesus, which means, “God saves.” Luckily, this baby knows how to be and live and thrive no matter where he is put down. He can come in and do some good, some redeeming good.

For the grace of God has appeared, bringing salvation to all, training us to renounce impiety and worldly passions, and in the present age to live lives that are self-controlled, upright, and godly, while we wait for the blessed hope and the manifestation of the glory of our great God and Savior, Jesus Christ. He it is who gave himself for us that he might redeem us from all iniquity and purify for himself a people of his own who are zealous for good deeds.

Here comes the little baby Jesus. You will be surprised where he can tolerate being carried. You will be amazed at what he can do anywhere he is put down.

Amber Inscore Essick has pastored in the small rural community of Port Royal, KY for ten years with her husband John. She is the Adjunct Professor of Worship at the Baptist Seminary of Kentucky. In the warm seasons, she is in or near the woods as often as she can be, but in the winter, she likes to hibernate. Her three kids, Olin, Leif, and Wren can almost always be seen in the yard if you drive by the house. 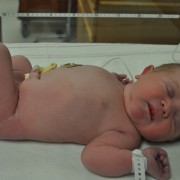 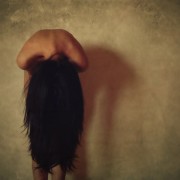 A Prayer for the Waiting

Worthy of Love
Scroll to top