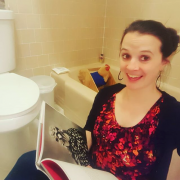 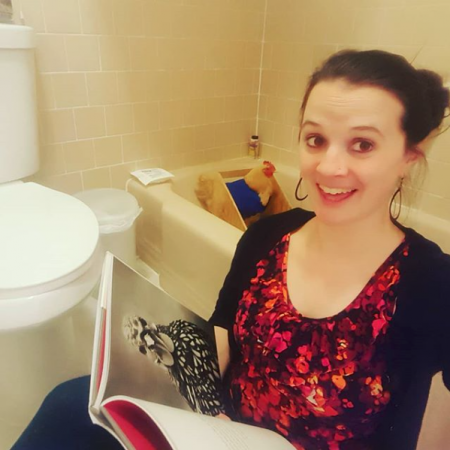 The author reading to Caroline Radesky, the chicken, soon after the accident.

At four in the morning on a Sunday, I woke up to infernal screeching. I threw on the lights, ran outside, scared the assailant away, and saw my favorite chicken, a golden fluffball named Caroline Radesky (after one of my roommates in college), shell shocked and bleeding standing over the tunnel that was dug into her home. We have three chickens in a coop behind our house. My spouse built the coop, complete with a roost up off the ground and chicken wire surrounding it. Only, a fox dug underneath that night and got to Caroline.

She was not dead, but I was sure she would be soon. My spouse is a pilot, and he was away on rotation for the week, so I was alone, unsure of what to do and not knowing who to call to help. So I just breathed deeply and moved Caroline into the roost, shutting the door so nothing could get in. Then I went back to bed. (Or tried to.) In the morning, Caroline was still alive, so I separated her from her sisters so they wouldn’t peck at her wounds and she could have some peace, and I went to church. I thought she would be dead when I got home. It was All Saints Sunday and I considered whispering her name under my breath when we lit candles for the departed saints. Laughing about a chicken with a halo helped me keep the panic at bay long enough to get through the service.

I grew up with cats and dogs. We got chickens at the urging of my spouse who grew up with chickens and ducks and horses. These chickens were three years old, and not the best egg layers, but Caroline was super friendly and sweet. I would let her and her sisters out after a long day at church and they would follow me and the dog around the yard, running away when I tried to get them back in the coop for the night unless they heard the sweet music of a Dorito bag opening, luring them back home. I love the sound of chickens cooing and the way they sometimes squat down to let you pick them up. These were simple pleasures of God’s creation; pleasures I was grateful for after the difficulty of years of three miscarriages and numerous failed fertility treatments that have frayed my relationship with God. And now my favorite chicken was dying and I had to lead worship as though nothing was wrong.

But Caroline was not dead when I got home. I scratched my head, and called a friend who has some experience rescuing pigeons to ask what I should do, still convinced I was only setting up a chicken hospice, not a hospital. She sent me to Tractor Supply for antiseptic ointment for the wound and bandages to immobilize Caroline’s damaged wing, where I was warned to wear gloves because the ointment stains the skin. I went home with supplies, picked up the chicken out of the coop, and nested her in the bathtub I had covered in plastic and filled with wood chips. Of course, that makes it sound like Caroline willingly hopped into my arms. I thought she was so feeble I left the door to the coop open while I fed the other two chickens, and she hopped out and ran around the yard, limp wing dangling, trailing feathers. She was feeling fine! I had to chase the chicken around the yard in order to bring her into the house, dress her wounds, and leave her sulking in the bathroom. (Yes, chickens sulk. They want to play outside; they don’t want to be alone covered in weird purple ointment in a bathtub.)

Chickens are social animals, so I would go in and talk to Caroline–and so would anyone else who came over to visit. A parishioner gave me a book with pictures of chickens; I would read it to her, and she would ignore me. I would bring her treats, and she would snatch them out of my hands and then ignore me. But she did not die. Instead, she kept me company when my spouse was away and was someone I could take care of when our crib still stood empty. Even though I still couldn’t believe she was not dead, I would feel my heart lift when I came home and saw how much she pooped. (I figured if she pooped that meant she was eating enough and she didn’t have any holes inside.)

After a week, my pigeon-rescuing friend Laura came over to check my chicken doctoring skills. She had me hold Caroline so she could poke around her wound more closely, to make sure nothing was infected. Satisfied, Laura put on my gloves and proceeded to pour the purple antiseptic ointment all over me, the chicken, and my bathroom. We looked at each other. “Whoops?” She shrugged.

We scoured the bathroom to get the purple off the walls before my spouse came home. I was stained purple for a few days. My chicken is still purple. We even gave her a bath in the sink (not what people typically mean by cleaning a chicken), but that just meant she flapped her wings and sprayed purple all over the walls of the bathroom in addition to the floor we had cleaned. Laura’s glasses were splattered so that when she took them off she had a frame of purple dots around her eyes. We dried Caroline off using the hairdryer. And she healed, after two months in the bathtub. I would have kept her in the house longer–she would coo at me in the morning and I could talk to her as I got ready.

Frankly, just seeing her healed gave me a sense of purpose, of possibility. I felt like she was a Jesus hen, resurrected from what I assumed was certain death, and gathering me beneath her wings. Jesus describes himself as a mother hen in both Matthew and Luke, wanting to gather all of us wayward humans as a hen gathers her chicks under her wings. In seeing this chicken flourish, I felt a small kernel of hope for resurrection for myself. In caring for her and feeling comforted by her presence in return, I felt gathered close to God again after having a strained relationship for so long.

How’s that for some weird theology? I experienced Jesus in the form of a purple, wounded chicken who lived in my bathtub.

My spouse wanted to reclaim the shower for humans, though, so as soon as I gave him the okay, he reinforced the coop with wire so no assailants could squeeze in at all anymore. He referred to putting Caroline back in the coop as Operation Spring Chicken.

We have had other de-bock-les (see what I did there?) since this fall when Caroline lived in our bathtub. Backyard Chicken is a wonderful resource; so are friends with experience rescuing pigeons so long as you don’t let them pour purple goop on anyone. When I think my clergy collar has come off so I can care for my chickens (I have to take off my collar literally after that one time I got chicken poop on my collar when I went out to check for eggs), I find I don’t stray too far from theological reflection, for God is present to me in cooing, feathered friends. And I wonder if there’s some environmentally safe feather dye so my purple chicken can match more liturgical seasons than just Advent and Lent.

Rev. Shannon E. Sullivan (she, her, hers) is a life-long feminist and United Methodist currently serving the community of Frederick, Maryland, as the associate pastor of Calvary. She is a proud graduate of Drew Theological School in Madison, New Jersey.

She is married to Aaron Harrington, her high school sweetheart, who is a pilot and all around aviation geek. They currently have a boxer puppy, two cats, and three chickens.