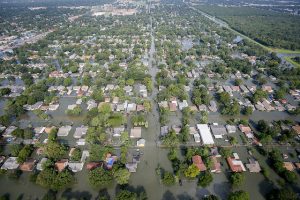 Dear Askie, I am so devastated by the news of so many recent disasters—Texas, Florida, Puerto Rico, and so many others. Watching it on the news just breaks my heart. What can my church and I do to help?

This is such a great question. For help with this one, Askie turned to the Rev. Elizabeth Grasham, a young clergywoman who serves as a Disciples of Christ pastor at Heights Christian Church in Houston, and who experienced Hurricane Harvey and its aftermath first-hand. Elizabeth writes,

First, let me say this: I’m glad you’re devastated. Maybe that sounds morbid, but it is all too easy to read reports of someone else’s suffering and to let it quickly slip from your mind. The fact that your church wants to reach out and help is a testament to the Spirit’s work in your hearts and minds.

Let me tell you what we experienced down here in Houston. Harvey tried to drown the Texas coast, and almost immediately people began been sending prayers, money, food, generators, and more. While I stayed trapped in my home for days, it was humbling to watch the surging humanitarian response on our behalf. But I need you to know this: in the days and weeks afterwards, there is still too much “stuff” donated and not enough money for survivors. While sending donations of clothes and toys is kind-hearted, it inevitably creates work for volunteers to sort the trash from the usable items. Folks need to get to Home Depot and Lowe’s; they need to buy clothes and school supplies for their kids to get to school; they need to buy medicines that were washed away. The first and most helpful thing you can do is donate money to the reputable disaster relief organization of your choice.

Now, maybe you’d like to do more than donate, and for that I’m deeply grateful. In the first few weeks, teams and teams and teams of people were showing up to muck out houses and rip out dry wall and do the nasty work of cleanup. But the scope of Harvey being what it was, not everyone is mucked out. Yes, even two months later. There are piles of trash (that used to be people’s lives) out on yards on countless streets. We still need teams and teams and teams of people to show up and help people recover, but the energy and enthusiasm has waned (like it always does). No one is being malicious; it’s just human nature. But what I’d like you and your church to consider is the following question:

How can we be of help in the long-term?

FEMA expects to be in Houston for years, not months. Puerto Rico is going to need long-term, large-scale infrastructure rebuilding. Disasters don’t get recovered from quickly, but people’s attention moves on quickly. So, beyond giving money at the beginning, it would be an incredible act of love to commit to aid beyond the immediate needs. I’ve been passing around an idea in circles I run in that is basically “adopt-a-nonprofit,” and here’s why: The magnitude of natural disaster we experienced can be an ‘extinction-level event.’ If the constituents of a small non-profit have to divert all of their income towards rebuilding, or if they are forced to move altogether because of disaster, that hits the bottom line of the organization. Case in point: In his article for the Journal of Southern Religion, Randy Sparks noted “Before the storm, the Lower Ninth (of New Orleans) had about 7,000 residents with an estimated 46 churches…by October 2006 only six churches had reopened, and only two more by July 2007.”

So if you and your church want to “do more” for those affected by natural disaster, consider what it would look like to become mission partners with a local church, a local diaper bank, a local food pantry, a local elementary school, a local women’s shelter. The possibilities for long-term partnering are varied, and they don’t have to be extravagant to be meaningful. The point is that you can become a long-distance ally in recovery by making sure cherished community centers and services don’t disappear.

The important thing to remember here is that all of these responses needed to be rooted not just in general benevolence, but in our baptismal identities as children of God. By the life, death, and resurrection of Jesus, we are all part of a body together. Wherever natural disasters occur, the body of Christ hurts and we are called to bring healing and wholeness to the body once again. Like the Apostle Paul says in 1 Corinthians, “If one member suffers, all suffer together with it; if one member is honored, all rejoice together with it.” I invite you and your congregation into the Christological mystery of suffering with one another so that one day we may all rejoice with one another.

Thanks to Elizabeth for her words of wisdom.

May I Take Your Order?
Scroll to top