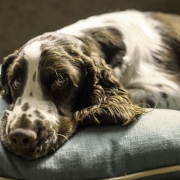 My husband is ambi-pet-trous, but I am a dog person. He can admire and enjoy a cat’s company, but I remain suspect that cats are secretly judging me and planning to overthrow my domestic rule at any moment. Also, they make me sneeze. I want a pet that will be slavishly loyal, that will greet me with wild enthusiasm when I come home and will gaze at me sympathetically when pastoral weights hang from my limbs. I want a dog. And, because my husband likes dogs as much as I do, to celebrate six months of marriage, we began earnestly searching for “the one.”

And, in the year 2007, it turns out that searching for the dog of your heart’s desire is not so different from online dating. Rather than trolling the aisles of Match.com for a man who seemed intellectual, but capable of intimacy, we were trolling Petfinder.com for a dog with an open, sweet face who would not bite children or defecate on the floor. Rather than speed dating, we traveled to local shelters, walked up and down the aisles between kennels and rapidly dismissed dogs that did not appeal to us (not housebroken, barks too much, jumps too high, seems scared, seems aggressive).

When we finally narrowed down candidates, we went on dates.

Our first date was with Sandra, in Charlottesville. We had seen her picture (cute, 25-pound terrier) and had been warned that she had Cushing’s disease. After a frantic 24 hours of asking our veterinary friends what that meant for us and for her, we met an early December morning. And, she was late. While I might have walked out of an actual date after a half hour of waiting around, two things held us in the waiting room of the SPCA.

First, Sandra was not really responsible for showing up on time. She’s a dog, for Pete’s sake. Her foster parent may be a little loose with punctuality, but that didn’t make her a bad dog. Secondly, it was spay-your-neighborhood’s-feral-cat day at the pound and the spectacle of a handful of humans literally trying to herd cats was worth the price of admission. The brave souls of the SPCA had even put up an actual Christmas tree. At one point my husband turned to me and said, “There’s a cat in the tree.” Sure enough, a cat was shaking the life out of the Christmas tree. An ornament crashing to the ground finally alerted the staff to the hijinks afoot.

Finally, Sandra appeared, helped out of her car by an older man. She was very sweet, and very quiet. When she walked, she pranced and her ears flopped in rhythm with her dance-like gait. Unfortunately, this nine-year-old dog was also showing her age. We could feel every vertebra in her spine and her tail was nearly hairless. She would walk, but not run, and didn’t seem terribly interested in play. There is no more beautiful sight than my husband running maniacally, arms flailing, next to a tongue-wagging dog, and this sweet thing just did not have it in her. So, we had to break up with Sandra the following Monday, over the phone, not even directly to her. We are big chickens.

That Wednesday in Staunton, we went on a pleasant afternoon date with Rexrode, a black cocker spaniel. We had hoped to make it a double date with her friend Teddy, a shepherd mix, but he backed out due to a case of “kennel cough.” Rexrode showed all the enthusiasm and verve that Sandra lacked, but had two fatal flaws. First, she is not housebroken, and at nine years old, I’m not sure this pooch is up for learning new tricks. Secondly, while she was mild and pleasant with other dogs and people, the minute she saw a cat, she emitted an incredibly piercing series of barks. Now, while I understand cat-antipathy, I’m afraid a rapid succession of these barks would cause neurons to fire in my brain that would make me beat my head against the wall indefinitely. We did not even have the grace to break up with Rexrode. We did that despicable thing guys do that I’ve been complaining about for years. We just left and never called again, with no explanation. Yes, we are “that” guy.

At this point my husband starts to wonder whether I will ever find a dog I can live with. We have visions of the bowls, chew toys and crate we’ve purchased lying empty, never to be graced with a furry presence. Even I am wondering if I’m too picky. Have I become one of those girls who won’t give anyone a chance? I am still waiting for “the moment.” I somehow think I will look into a dog’s eyes and there will be a flash of recognition and understanding.

We also begin to realize that the descriptions on Petfinder.com have a lot in common with the descriptions on Match.com—they are not necessarily accurate. When we go to a third shelter the following Saturday, we meet a “sweet-natured dog” who hates other dogs. We learn that “happy and playful” means she pulls so strong on the leash that you’re at risk of pulling your shoulder out of joint. We see dogs who look nothing like their pictures. (Literally. Some of these poor shelters get so many dogs that they get mixed up and attach the wrong picture to the dog’s description.)

Saturday, after a long day at yet another shelter about an hour from where we live, we decide to travel back to Staunton to finally meet Teddy, the dog with kennel cough. We meet him in the cat visiting room, so as not to infect any other dogs. He’s a medium-size spaniel-shepherd mix and he’s initially very shy. As we sit with him quietly, he approaches us curiously, settles in, places his paws and head on my knee, and sighs. This is it. This is the moment. Despite a lifetime of my father telling me, “Don’t pick the sick puppy,” I realize this is the dog for us. After all, my dad’s words were just a metaphor, right?

We pick him up the following Monday, and take him directly to the vet. On the way to the vet, we frantically decide to name him Henry.

This is clearly not the most thoroughly-considered name, but he seems rather Henry-like, we think. At the vet he endures three shots, one round of blood drawing, and even a stool sample with great dignity. We get the all-clear and head home.

One of his first acts upon arriving at the house is to mark his territory–on my beloved leather, rolling briefcase! We correct the behavior, and bring him outside to pee. I begin to realize, much like any relationship, there are going to be a number of quirks and kinks, some of which will be cute, and some less so. We brush and brush and brush most of the tangles out of his hair, which he enjoys, and I give him a bath, which he does not enjoy. Henry is also terrified of staircases, which I had not even considered.

We also spend about an hour trying to give the dog his antibiotic. We have no luck with medicine hidden in cream cheese or peanut butter, and the dog rejects our attempts to pop the pill in his mouth. After a call to our dog-owning neighbor, we put the pill in some leftover barbeque and down it goes.

About this point, we all collapse. The dog curls up on a blanket, my husband wraps some Christmas presents, and I write this article. My pajamas smell like wet dog, my possessions have been assaulted, I am completely exhausted, and yet I look forward to tomorrow. I look forward to teaching Henry, and to learning from him. Mostly, though, I look forward to those moments when one paw, then another, then his small head plop down on my knee, in a small moment of grace.

Sarah Kinney Gaventa is an Episcopal Priest and Christian Educator in Greenwood, Virginia, at the foot of beautiful Afton mountain. One of her delightful five-year-old parishioners gets Sarah mixed up with her 60-year-old, six-foot-tall, male boss because they both have "Reverend" in their name. This makes Sarah and her boss laugh for long periods of time. Sarah is married to Matthew Gaventa, whom she met on a blind date, not on Match.com. (Though she has presided over at least one very successful Match.com wedding.)