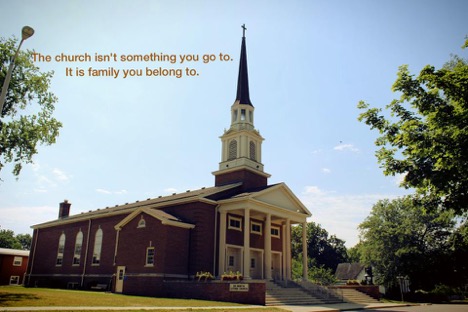 I have seen various versions of this meme going around Facebook, and while I don’t necessarily disagree with the sentiment, I generally just glanced past the posts without much thought. That is, until a friend posted this one. This one hit me differently.

When I look at this image, I am instantly transported into that building. Many of my earliest memories are of that place – hearing the story of how I took my first steps in that kitchen with its yellow flecked linoleum floor and countertops, anxiously awaiting the Sunday School year when I would finally be in the coveted room that had the huge rainbow mural on one wall, crawling around on the shuffleboard-covered floor to pick up the yarn scraps left by the quilting ladies, sitting four pews from the front on the pulpit side and looking at the sky blue dome behind the altar, practicing the phone number (which I knew before my home phone number) for the rare times I was home alone so that I had a way to contact my mom–a key volunteer before she became a staff member. This building was just as much my home as the house I lived in.

Pastor Jodi Hinrichs first learned to be part of the family of faith with the people of Dr. Martin Luther Church (ELCA) in Oconomowoc, WI. On the roster of the ELCA, Jodi is currently on-leave-from-call.

A Prayer for My Sons
Scroll to top