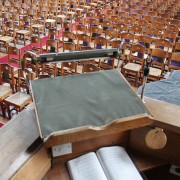 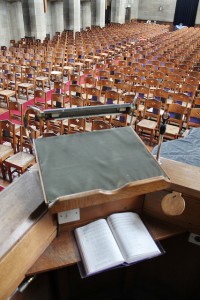 Somewhere in my early years of ministry I picked up the message that in order to be the pastor to everyone, I must be very careful never to sound partisan or to take a side on an issue. I’m pretty sure it started with the discussions about political bumper stickers (don’t) and bled from there into preaching, writing, and teaching. Congregations are made up of a wide spectrum of opinions and beliefs, of course…indeed sometimes that’s the only diversity to be found in a suburban mainline sanctuary. Because I wanted the most people possible to be open to hearing the gospel message, I was careful to say things in such a way that no one would stop listening in anger. Because I didn’t want anyone to feel they didn’t have a place in the community, or that I couldn’t care for them because we disagreed on political or economic issues, I was careful to use words in a way that would appear to agree with everyone.

And yet when I read scripture, I don’t see many people being careful. Or rather, the ones who are being careful are usually not the ones I particularly want to emulate. (Barak. David. Jonah. Judas. And that’s just off the top of my head!) Instead I see prophets and preachers speaking the word they are given, and when the hearers refuse to hear, that seems to be on them, not on the preacher. I know that we can’t control how people hear things—every preacher has stories of people loving or hating something we never said. I know it is not my job, nor within my ability, to control other people’s reactions. I have heard the charge to the pastor that includes the admonishment to “fear God more than you fear the congregation.” I also know that it is the responsibility of the one with the microphone to do her best to open people to hearing the good news, rather than shutting the doors before getting to the point.

Somewhere along the way, I became practically obsessed with the last sentence of that paragraph, and it nullified everything that had come before.

What is the impulse to be so careful about? Safety? Job security? People pleasing? An effort to embody healthy communication? Probably all of the above. I’m no longer certain that it is faithful, though.

A few months ago, when years of conflict, hard work, and frustration were finally turning a corner, I had a bit of a revelation. I’d already been hurt. I already knew some people weren’t pleased. The financial situation offered little job security anyway. So what was I so afraid of?

The very moment I decided not to be careful anymore, it felt like a weight lifted. No more spending hours carefully crafting sentences to be sure no one would be angry. No more wondering if I could really say that. I prayed, I studied, I wrote, I preached, I taught. That is my calling, and sometimes it’s going to make other people uncomfortable—and sometimes it’s going to make me uncomfortable. I’m not any less scared when I step into the pulpit, as if this might be the day half the congregation storms out, or the day the personnel chair says “we need to talk.” But I still feel lighter, and maybe even more capable of preaching a hard word when we need it—and also of preaching the ridiculous generous amazing grace of God. I hadn’t realized it, but in some ways being careful not to offend anyone had also meant I was careful with grace. We all know what happens to people who are careful with grace, right? (See 2 Samuel 6:6-7…)

A friend and mentor once told me you can know you preached a good sermon when you can hear them building the gallows in the parking lot. There may be a cost to letting go of being careful, but it is nowhere as expensive as continuing that same agonizing path. After all, as a Chinese proverb reminds us: “if we do not change our direction, we are likely to end up where we are headed”—and the destination of careful preaching is not a place I want to be. Pray for me, sisters—I am letting the grace of God shake the cart and refusing to steady it with my fear and sensibility any longer.

Teri C Peterson is a Presbyterian pastor in the Chicago suburbs, a cat-mom, and an avid reader of historical fiction with girls in pretty dresses on the cover. She and her best friend co-authored the book Who’s Got Time: Spirituality for a Busy Generation (Chalice 2013). Teri also co-founded and contributes to the open source worship resource LiturgyLink.net, serves on the board of RevGalBlogPals, and sometimes writes about whatever strikes her fancy at clevertitlehere.blogspot.com.

Will I Sing a New Song in My Forties?
Scroll to top