The following sermon was preached at The Church of St. Luke & St. Matthew in Brooklyn, New York on August 13, 2017. 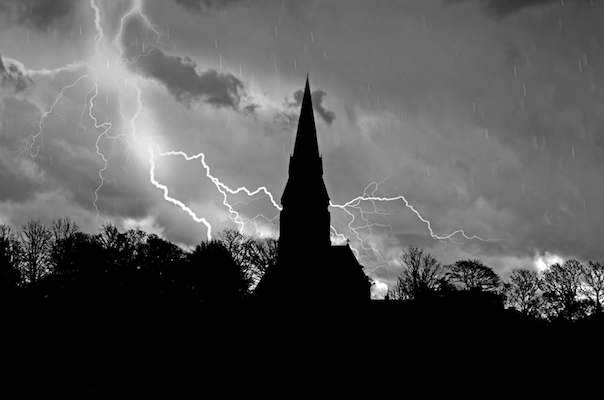 The theologian Karl Barth was known to have said that preachers should write their sermons with the Bible in one hand and the newspaper in the other. If he were alive today, he might have amended that statement to say that we should preach with the Bible in one hand and our Facebook news feed in the other. I have to tell you, there were two topics in particular that came up in my Facebook feed this week that we need to discuss here this morning. And while it might not seem so at first, they are actually related to each other.

The first was an article about church decline. I’ve seen dozens of similar articles shared by clergy colleagues, stating facts and figures about Christianity’s demise in the West: noting a decline in church attendance and a decline in young clergy and the impending leadership vacuum it will create. All the statistics that we faithful people who come to church every week don’t want to hear. These articles all speculate as to the reasons why people aren’t finding church to be relevant anymore: we’ve watered down the gospel to create mass appeal, the enlightenment, the industrial revolution, capitalism and individualism, the internet, televangelists and millionaire celebrity pastors, church scandals, an increasingly secular culture… Perhaps all of these reasons are true, to a degree. The sum of it all, though, is what we need to pay attention to: that in rapidly increasing numbers, more and more people find church, Christianity, a life of faith, simply irrelevant.

The second was what happened in Charlottesville this weekend. In case you aren’t aware, a debate over removing the statue of Confederate general Robert E. Lee from a city park in Charlottesville led to white nationalists planning a rally they dubbed “Unite the Right.” There was also a call for 1,000 clergy and faith leaders to come to Charlottesville in prayer and community to counter-protest, and many Episcopal priests and bishops, as well as bishops and ministers from other Christian denominations, some of whom are personal friends, were among those gathered in counter-protest.

Starting Friday night, radical white supremacist protesters against the removal of the Confederate statue descended on Charlottesville. In a scene all too familiar to many who were part of the Civil Rights era, they marched through Charlottesville with torches in hand, shouting hateful racist slogans and terrorizing the counter-protestors. One colleague of mine posted a picture that he called “an enduring image” as to why he was there. It was taken inside the church where he and hundreds more faithful counter-protestors were gathered and showed a young girl, probably eight or nine years old, being held and comforted by the pastor of the church, with a terrified look on her face because white terrorists with torches in hand had encircled the church outside and were not letting them leave. The one difference was that now, there were no white hoods to mask their faces. Thankfully, the protest eventually was disbanded and they made it out alive.

The planned protest was for Saturday at noon, but it was cancelled before it even started. Saturday afternoon, in an act of domestic terrorism, a radical white supremacist drove his car into a crowd of peaceful counter-protesters, killing one person and injuring at least 19 more. Virginia declared a state of emergency, police were ordered to clear the area, and people were told to go home.

I’m so upset at this headline that I’m still struggling to find the words for it. I’m baffled, confused, and sickened. How was this allowed to happen? How can white supremacy—neo-Nazism—have such an organized stronghold, such legitimacy, in this country that literally fought against Nazis in a World War? Why are we calling this “white advocacy” and the “alt-right,” using words normally associated with political issues, to tame down a non-political movement that has proven itself to be nothing short of domestic terrorism? How can there be such strong bleed-over between radical Christian fundamentalists and radical white supremacists, while the church stays relatively silent and allows them to corrupt the gospel?

I have watched as the rise of white Christian fundamentalists has led to the rise of white nationalist extremists who think that our country will be great again if it is white again. The media has been calling them the white evangelical base, but that’s not accurate. There are plenty of white evangelicals who are adamantly against white nationalism. It is the white radical Christian fundamentalist base that has dominated American consciousness and conflated Christianity with white supremacy. The organizers of this weekend’s white supremacist rally all proudly call themselves Christians.

I see this, and I echo the words of Elijah from today’s Old Testament reading: “[Your people] have forsaken your covenant, thrown down your altars, and killed your prophets with the sword. I alone am left, and they are seeking my life, to take it away.”

We American Christians aren’t alone, we know, and our prophets haven’t physically been killed by the sword. But we cannot deny that the rhetoric of Christian fundamentalist extremists has cut down the voices of those who have tried to speak the truth of the gospel in times like these. We may not be dead, but our message—the heart of the gospel—has been killed and buried by sensational headlines. Radical Christian fundamentalists have forsaken their covenant with God. They have thrown down the altars of truth, of justice, of righteousness, and they have built for themselves the false idols of racism, power, and oppression.

It must be said in every single house of worship this morning: what happened this weekend in Charlottesville—white supremacists marching out in the open, terrorizing and killing those who boldly stood up to them to speak the truth in love—is not only sin. It is evil. The devil marched through Charlottesville this weekend, holding tiki torches and shouting Nazi slogans like “Blood and soil.” This is Satan—in Hebrew, “Ha’Satan”—the adversarial force of wickedness. Ha’Satan is alive and thriving, and no longer masking himself in a white hood as he walks in our midst.

I don’t need to remind you of the words of the prophets that God “hates the wicked and the one who loves violence” (Ps. 11:5), that God hates “hands that shed innocent blood and hearts that devise wicked plans” (Prov. 6:16-19). I don’t need to tell you that our Savior Jesus Christ himself was the one who said, “blessed are the poor, blessed are those who are persecuted for righteousness’ sake,” (Lk. 6:20, Mt. 5:10) and that our God stands with the marginalized and the oppressed. I don’t need to tell you that we, as the body of Christ in the Episcopal Church, make solemn vows from the day we are baptized to “persevere in resisting evil” and to “respect the dignity of every human being.”

You already know that. But too many people don’t. And I have to wonder if that is why the Christian faith has become irrelevant.

I have to wonder if people walk into our churches and see a lot of energy focused on internal squabbles rather than external mission, on doing things right rather than living righteously, on maintaining peace rather than preaching peace, on not rocking the boat rather than venturing out into the storm, and if they see a social club instead of the body of Christ. I have to wonder if we haven’t been loud enough on the issues that really matter.

My sisters and brothers, I am convinced that, like Esther was told so many years ago, we have been called for such a time as this.

Now is the time for us to REclaim and PROclaim our faith, the faith in Jesus, who came to show the world what God’s love—sacrificial and unconditional—really looks like. We are called, at this moment in time, to not be ashamed of the gospel. To boldly tell our neighbors that we denounce the evils that have taken place this weekend not because they’re wrong, but because they are sinful and evil. Not because we believe in goodness, but because we believe in Christ. Not because we are good, but because we are Christian. Jesus calls us to such a time as this. It is time for the church to be relevant again. It is time for the church to bravely step out of the boat and into the storm.

When the disciples saw Jesus walking on water, they were terrified. They didn’t know how to swim, and a vicious storm was raging, and they were in danger of drowning. But when Peter sees Jesus, his first words weren’t, “Lord, save us!” He didn’t bury his head in the sand, or cower in the boat, and wait for someone else to take care of the problem. Peter does something really remarkable. He says, “Lord, if it is you, command me to come to you on the water.” Peter sees Jesus literally walking in the middle of a deadly storm, and in an immense act of faith, says, “If it’s really you out there, then tell me to join you.” And he does. He gets out of the boat and enters right into the storm, into literally a life and death situation. He steps out into a scary situation and says, “I trust that Jesus is going to be there.” And Jesus does not let him drown.

The storms of racism are raging around us. But Jesus is with us in the storm. In the image I mentioned earlier, of the little girl, frightened inside a Charlottesville church, being held by her pastor as the storm of white supremacists raged outside and threatened her very life, I see the truth of what we can boldly proclaim in this moment. I see evil encircling and threatening those who try to fight against it; I see the faces of those oppressed by evil, scared but determined to “overcome evil with good”; I see evil holding its torches, which burn dim against the Light of Christ. The light shines in the darkness, and the darkness cannot overcome it.

Lord, if it is you out there in the storm, command us to come to you. Amen.

Julie M. Hoplamazian is an Episcopal priest, dog lover, arts enthusiast, and proud Armenian. A Philadelphia native, Julie has been engaged in ministry in New York City for the past 11 years.

Sinking: A Sermon on Genesis 37, Matthew 14, and Charlottesville

Out of the Human Heart
Scroll to top