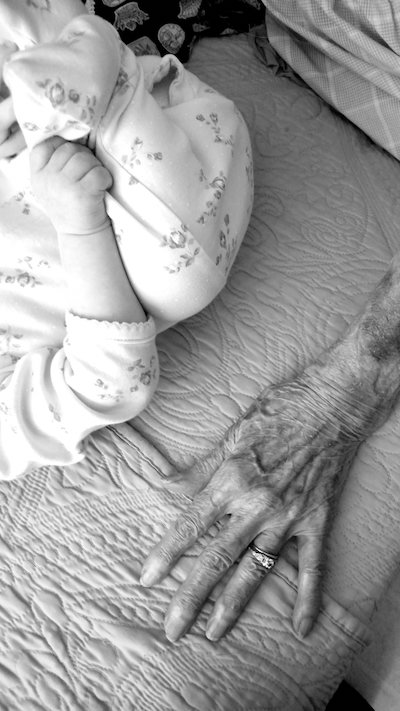 Buford probably never paid homage to another person
in her life. Widowed young, no children, innumerable
opinions, Buford got to work and never stopped—

into her seventies. When she finally decided
to move to the nursing home, she ordered
a motorized wheelchair, in which she became

unstoppable, even if another–slower–
resident got in her way. And when she turned 104,
she proved every day that she didn’t get that far

by being weak-willed. (Move that. Stand there. Stop
talking so loud. My hearing is fine.) Visiting
Buford was less an act of non-anxious

presence, and always more of an exercise
in following orders. Yet, one time, when I brought
my fourteen-week-old daughter to Buford’s room,

and placed her on the worn, yellow bedspread,
Buford stooped over her, as low as she could go.
And as my daughter started swinging

her small soft fists, Buford reached out,
allowing one of those squishy hands to catch her bent
knuckle, and she paused for a moment, letting

her finger be gripped by this other finger,
which had entered the world 103 years
and 10 months after hers. At this,

as flesh met flesh,
I knelt beside the bed
and bowed my head.

Kathryn is a Presbyterian pastor, serving a downtown church in Richmond, Virginia and attempting to savor life with her husband and daughter.

Finding Love in the New Year
Scroll to top