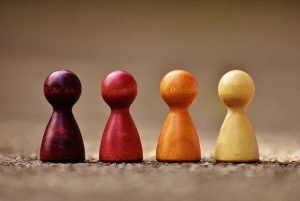 I heard this from adults for most of high school. Usually pronounced with bittersweet bewilderment, it would be followed by a conversation about the surprise at my presence. As a teenager I was highly involved in the Church. (My call and ordination maybe shouldn’t have been such a surprise to me.) Church was both refuge and fun for me. As a young overachiever who was a bookworm and enjoyed learning, I first heard these words with hope. I wasn’t, as I sometimes feared, unpopular because I was unlikeable. If I was exceptional, perhaps I was misunderstood—and what teen doesn’t like the idea of being misunderstood.

Too quickly I realized that exceptionalism did not make me less lonely. Whether it was for not being popular or not being ordinary, I was still isolated.

As my peers and I began to mature, and I found more friends my own age, I gained new appreciation for the slight that had been offered to my equally accomplished and committed peers. It was, I increasingly discovered, easy to surround myself with peers who share my values if not my faith. My knowledge of which did not stop the comments. I kept hearing about my “exceptionalism” for the decade I spent being the youngest. The youngest person at a meeting, the youngest priest in the room and the diocese.

I am no longer the youngest priest in the diocese—though I’m often still the youngest person in the room. But I still hear how “exceptional” I am. Now that it is not rooted in my age, it catches me off guard more often. It sneaks up in conversations as they turn to refugees and immigration. It doesn’t start with the bewildered sadness in these conversations. Far more often its confused anger. “Those people” who come here and are a drain on our system, by stealing jobs or tying up resources. I am an immigrant.

Four years ago, I moved from the United States to Canada because this is where God had called me to serve. Because clergy move through international borders in complicated ways, the words at the top of my visa are the ones people debate: “Temporary Foreign Worker.” People who have come to Canada on such a visa are often be portrayed as uneducated job stealers.

In four years of conversations where immigrants were denigrated, my own immigration status has always been waved off because I’m “one of the good ones.” The stated reason has usually alluded to my English skills or, especially in the case of refugees, that I’m employed. Both facts which are entirely due to my privilege—either as a native English speaker or an Anglican priest. The dismissive waves which accompanies these statements always seem to diminish the challenge involved in moving to a foreign country. Additionally it entirely dismisses the incredible perseverance of immigrants who tackle all of the cultural shifts and increased paperwork immigrants in any circumstance face.

I’m not one of the good ones. I’m the exception people have to create if they do not want to challenge their ageism and racism. In naming me as “exceptional,” they are continuing to ignore numerous wonderful, amazing, complex people like me. Moreover, in naming me as “exceptional,” they are giving themselves permission to ignore any suggestions I might make that would increase the inclusion and respect for people like me.

It is a peculiar double exclusion, and entirely dissonant in tone from the Divine proclamation of Good in Genesis 1. As creation is spoken into being, light, land, flora and fauna, humans themselves, each group is named good. On the sixth day, when God looks and sees creation, everything and everyone is declared not only good, but very good. Me, the young person living at home, the immigrant mopping floors, the people who try to label me exceptional – all of us together are who God calls very good. So, when the young adult living at home and the immigrant with broken English are, I, too, can be one of the good ones.

The Rev. Robyn King, church geek and immigrant, lives in Edmonton, Alberta, where she serves as Rector at St. Peter’s Anglican Church. She and her husband currently hope their dog and newly adopted cats will learn to see good in each other.

Redefining Possible: CrossFit, Transformation, and 5 AM Trips to the Box