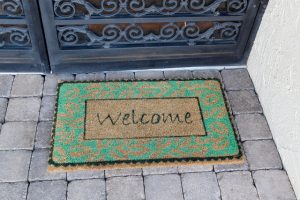 Houses aren’t meant to sit empty. It’s hard on them. They’re meant for occupying—pipes need water to move through them, not just to sit and corrode. Windows and doors need to be opened and closed, lest they get stuck in place, stifling the air inside. Roofs need someone to notice when they leak. Wires need to have a reason to connect, to come alive, to carry current. The walls and the beams need the warmth of occupation in the winter and the flow of breeze in the summer. Our houses—our homes—are creations of our own hands whose well being is directly linked to their connectedness with us.

This was the first thought that came to me when I opened my back door to my stifling house after it had been sitting vacant for a week. It looked like home, but it didn’t smell like home. It didn’t smell bad, just different—stale and empty and static. There were no lingering kitchen smells from a meal prepared, no pungent wafts of wet dog barging in through the door, no sweetness of beeswax candles burned or perfume of fresh farmer’s market flowers on the dining room table. I didn’t realize the rhythm of my life had a fragrance until it left my house with me.

I fiddled with the thermostat, dragged in my luggage, and began to unpack. I was completely and utterly exhausted from a red-eye flight and a week of people-ing in a time zone three hours different from my own. In the quiet of my solitude I felt every introverted cell in my body begin to relax, uncoil, and breathe. Yet the more I moved about, the more dust I kicked up, the more rooms I disturbed, the more I began to feel like I wasn’t actually all that alone. I was in the presence of Home, and that’s different than being by yourself.

It slowly dawned on me that this was the same feeling I’d felt a few nights before while I was in Vancouver for the YCWI conference. I’d felt it around an unfamiliar table in a bustling restaurant with seven other single young clergywomen and a host of loud strangers making conversation over clanking plates and silverware. How strange, I thought, that this same feeling—the feeling of Home— could come at two such different times.

Home is an overwhelming feeling, encompassing connectedness and giftedness and affirmation and understanding and meaning and companionship. Home is deep and broad and wide, rooted in love and blooming in respect. Home is born of mutuality, and it births resilience that can withstand the strains of discomfort and distress. Home is something we struggle to name, but we all understand, something that acknowledges that we are creatures of God’s own hands whose well-being is directly linked to our connectedness with God through one another, and so often it’s something that our churches, our communities, and our cultures assume that single people live without.

Around that unfamiliar dinner table in Vancouver, eight single YCWs affirmed the connection and meaning that we had deliberately cultivated in our lives. We celebrated the communities of love and trust we’d invested in, the joy we take in good food and drink, the satisfaction in our acts of creativeness, the wonder in each adventure, and the richness of being connected to family, friends, parishioners, and pets. We didn’t pretend there were no challenges to our lives. We acknowledged, instead, that there are challenges in everyone’s life, whether they’re romantically partnered or not.

I’ve been tremendously fortunate to call many places home: Camp Hanover, Virginia’s Blue Ridge mountains, my mother’s house, Blacksburg, Richmond, and a whole slew of Presbyterian churches. In truth, though, that feeling of Home had less to do with the physical location and more to do with the community I found there. Last year I found Home in Boston, this year in Vancouver, next in St. Louis, because that is what the family of Young Clergy Women International is to me—another iteration of the gift of Home rooting me in love and drawing me out in respect.

Sister, you are Home, and you are seen. Thanks be to God.

Allison Unroe was born and raised in Richmond, Virginia. After college she served as a Young Adult Volunteer in Miami, Florida, before earning her MDiv from Union Presbyterian Seminary. She now serves Fairlawn Presbyterian Church in the beautiful Blue Ridge Mountains. Allison is a determined gardener, a doting aunt, and an unapologetic dog mom.

Loving Across Difference, Living Without Fear
Scroll to top