“The Kingdom of Heaven is like leaven which a woman took and hid in three measures of flour until all of it was leavened.” Matthew 13:33 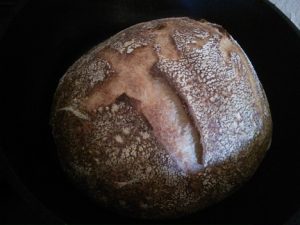 A fresh sourdough loaf made from the author’s starter, Sid.

My mom baked bread when I was a young child. I can still remember the bread pans overflowing with honey-colored dough and the steam rising as she cut the first slice. But as I grew, and as our lives grew busier, somewhere along the way the hot loaves of honey wheat bread were replaced with loaves of cracked wheat from the grocery store. Still, the memories of my mother’s bread led me to want to try making bread myself. My own adventures in bread baking began in high school when my gadget-loving dad provided me with a bread machine. Although the bread from the machine was definitely tastier than the store-bought variety, I quickly lost interest in the process. I wanted more of a challenge, so I decided to make honey wheat bread the way my mom made it. The ingredient list was long: yeast, cottage cheese, honey, milk, and two kinds of flour. But it never called for leaven.

Though I was familiar with Jesus’ parable about leaven, at the time I didn’t understand that leaven was more than just Bible-speak for active dry yeast–the only kind of yeast I had known it in its scientifically isolated form. So my bread baking went on as usual until I happened upon a documentary about sourdough bread and the fermentation process used to make it. The documentary described the way that bread was made throughout the world for centuries before scientists were able to capture yeast and put it in a powdered form. I was mesmerized by the ancient bread-making practice that unfolded in the documentary, and I was determined to try it.

I couldn’t get over the differences between this method of baking bread and the way I had always done it. For instance, sourdough bread calls for just three ingredients: water, flour, and salt. Unlike other breads, sourdough uses wild yeast that is caught both from the air and the flour. This wild yeast works more slowly, but it also more thoroughly breaks down the gluten in the flour. Another difference is that a baker of sourdough bread maintains a starter (a mixture of flour and water that is carefully observed through smell and taste) which, if handled with patience and care, will eventually show signs of life: bubbles and a light, airy quality that indicate the yeast is active.

When I first made a sourdough starter, I mixed together flour and water and let it sit. Each day I checked on it, dumping off half the mixture and feeding it with more flour and water, hoping for signs of life. I was elated when I eventually began to see bubbling. The yeast was alive and grooving. I named it Sid.

Here’s where leaven comes in. In order to make leaven, the baker mixes a tablespoon of starter with more flour and water the night before the bread baking is to take place. Making leaven is a delicate process. (I attempted it three times before making a proper leaven.) After succeeding in making leaven, the baker adds more flour, water, and a bit of salt. From this point on the process continues to be wholly different from the way I first learned to make bread: there’s no kneading–no forcing the dough by my own sheer will. Instead, in the sourdough process, one gently turns and folds the dough at regular intervals throughout the day. This process is slow, calm, and oddly rewarding. It allows me to see the leaven working its way through the dough until all the dough is bubbling with life–until all the dough is leavened.

As a chaplain at a forensic psychiatric hospital, I work in a particularly difficult ministry setting. On one level, baking sourdough bread is a freeing and relaxing respite from this hard work. It is certainly more calm and more ordered than much of what I experience when I’m on the clock. But even more than providing a needed Sabbath from the workplace, making sourdough bread using this age-old method informs my ministry. When I minister among psychiatric patients and the health professionals who care for them, I am reminded of the wild, aliveness of my starter and the gentle turning and folding of the dough. As it is with sourdough bread, so it is with my patients: I’m not there to force my will or to exert my control. At best, I gently guide the process, working hard to provide the conditions for the sometimes elusive miracle to take place. I cannot solve my patients’ problems or answer all their questions, but I have the privilege of giving them support and guidance as they do the work they need to do with God. And sometimes I am allowed to watch as the life-giving leaven that is God slowly works its way through them, creating new life and hope where there once was pain and despair.

Ali Van Kuiken is an ordained Episcopal priest and the chaplain at a psychiatric forensic hospital in Trenton, NJ. In addition to baking, she spends her free time canning, reading, and drinking tea.

The Choice to Look Away
Scroll to top