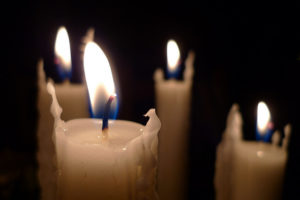 A few years ago, I inherited the task of assigning Advent candle lighters for our church. For as long as anyone could remember, nuclear family units had been assigned each week’s readings and scriptures. Parents would help children to light the matches and teenagers would read the apocalyptic texts with gusto.

But there had been a pastoral transition, and the Advent wreath liturgy suddenly fell to me. I remembered my own small hurt the year before when I realized with a certain start that I, a single woman in my thirties, wouldn’t qualify for this particular liturgical responsibility in our community. Then I started thinking about all the other people in our congregation who might be feeling that particular sting of being left out.

I thought about the handful of elderly widowers, so desperate for human touch that they doled out bone-crushing hugs to anyone who’d let them. I thought about the divorced man with partial custody of his young son, a schedule that made committing to anything at church together nearly impossible. I thought of the recently retired school teacher, never married, and the ways her depths of wit and wisdom filled a dozen important roles and relationships but who was never asked to light a candle in anticipation of Christ’s coming.

And then, after I thought about these particular people who might be sharing the twinges of alienation like I was, I started thinking about all the people in scripture that we’d be leaving out of our Advent liturgy if they happened to show up here in church some twenty-first-century Sunday morning.

The list of single people who get enlisted for world-shaking roles in scripture is long and fascinating: Jeremiah consoles God’s people through exile. Nehemiah heads up the massive rebuilding effort when the exiles finally return. Esther uses her royal role to save an entire people. Ruth breaks cultural expectations to create a new family and a new life for her mother-in-law. Anna proclaims the true identity of the Christ child before almost anyone else realizes who or what he is. John the Baptist prophesies in the wilderness, preparing the way of salvation. Paul’s letters shaped the foundations of the Christian movement and still guide our communities today. Martha made a place of refuge for Jesus with her home and her friendship.

Scripture, by the way, isn’t too fond of marriage and what we call ‘family life,’ today, anyway. Paul tells the unmarried and the widows to “remain unmarried as I am,” (1 Corinthians 7). Jesus says, “whoever comes to me and does not hate mother and father, wife and children, brothers and sisters…cannot be my disciple,” (Luke 14).

Jesus himself was a young, single man. He had no wife, he had no children. I realized, that Advent, that in my congregation, Jesus Christ wouldn’t be qualified to light a candle in anticipation of his own birth.

We changed up the Advent candle lighting that year – youth joined their mentors; single older adults paired up with elementary schoolers; widowers and divorcees read scripture, lit candles and proclaimed the coming of the one who came to offer us a radically different vision of how relationships work.

I am proud of the way we broke with tradition and found a way to include more people in this part of worship. But I am even more satisfied to have discovered the thread of unlikely, unpartnered, single people that God has chosen, in scripture and in my own experience, to become witnesses to the coming reality of peace, justice, and reconciliation. It gives me strength and hope that, despite what my culture preaches and despite what my church too often enforces, there is a place in this work for me, too.

Dana Cassell lives in Durham, North Carolina, where she serves as Pastor at Peace Covenant Church of the Brethren. She loves mountains, bacon, books, and her dog, Franny.

A Poem on the Eve of Lent

My Not-So-Dirty Secret
Scroll to top