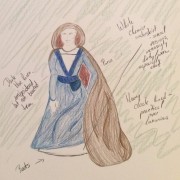 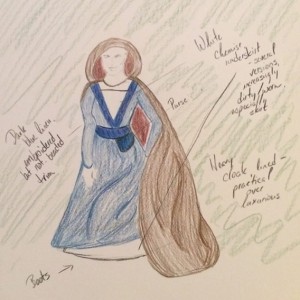 I have no doubt that I am called by God to the sacramental priesthood. Parish ministry is another story. While I find many elements of my job rewarding, there are plenty of things about being a generalist in a parish (which is all I’ve done for my six-plus years of ordained ministry) that don’t necessarily fit well with my personality (introverted and heady) or my training (we all know about those classes in administration, group dynamics, and boiler repair that they don’t offer in seminary!).

And then there are the ongoing structural changes in the church and in ministry as a profession – the decline of the mainline denominations, the gradual eroding of full-time jobs with benefits – that make the whole concept of ministry as a long-term profession uncertain and stressful. Several of these factors are currently converging in my professional life and making it difficult to feel that I’m actually doing the work I’m gifted, called, and trained to do.

One of my saving graces for the past year or so has been finding my way – almost entirely by serendipity, which is another way of saying the movement of the Holy Spirit – back into the theatre. As a high school student, I was obsessed with Broadway musicals – listening to the albums, attending the shows, attending the intensive theatre program at the Diocese of Connecticut’s church camp. Within a couple of years, I was writing my own scripts. The first ones were resoundingly awful, but by the time I was a year or so out of college, I had an adaptation, about 80% complete, of a young adult novel that I had loved as a kid, and I knew that it was good. (The biblical resonances of that last phrase are deliberate.)

However, I’m a writer and lyricist – I can’t compose music. And so, for thirteen years, the script languished in a drawer. I approached half a dozen composers trying to find someone with the right combination of skills, but none were interested.

Last year, as part of my second job with the campus ministry at the local university, I stumbled into the idea of being “chaplain” to the theatre department’s production of Les Miserables – a script soaked in the Gospel from beginning to end. The director, a woman who wrestles with the divine and with the big questions in almost every production she does, introduced me to the cast at an early rehearsal. Within minutes I was talking to the junior playing Enjolras (the leader of the student revolutionaries) about what it meant for his character to be a Christ figure. And just like that, I was rejoicing in having the kind of conversation that engages and feeds me, and in being present to these incredibly smart and talented kids as they found and pursued their own vocations and welcomed me into their creative process as only theatre people can. To immerse myself joyfully in the atmosphere of a theatre in the middle of a rehearsal process, and in the instant community of a group of people engaged together in an all-consuming artistic task, was something I hadn’t even realized I’d been missing, but that felt like coming home.

I hung out with the theatre kids throughout that production and cried my eyes out during the performance. I have kept in touch with many of them (and will be “chaplain” to another show this fall). And, of course, having renewed my adolescent enthusiasm for Les Mis, I was reminded of my own script languishing in the drawer.

In May, chatting at random on my sister’s Facebook page, I got into a jokey conversation with a friend of hers who writes music and said, “Hey, F., do you want to write a musical?” When we got in touch by private message, we discovered that she had wanted for years to adapt the very same Young Adult novel on which I was already working. Talk about a Holy Spirit moment!

F. is actually a trained composer, and knows about things like how to obtain copyright permission to do an adaptation, and so we were off and running. I sent her my script, which she loved. We talked about how to structure the score and what revisions might be necessary. She started to write music. I loved most of it, but had constructive criticism for some of it, as did she for my lyrics. So far, we’ve worked astonishingly well together, all feedback has been well received, and we’re creating something that neither of us could do alone. As I write this, in the third week of December, we have just received an enthusiastic response from the current holder of the rights to the novel, who is passing on our sample scenes and songs to the publisher.

This project has been a labor of love for me from the beginning. Apart from one elective undergraduate class in musical theatre writing, I am entirely self-taught when it comes to structuring a musical script and writing lyrics. I know that I can do it, and do it well. But it is profoundly affirming to have that knowledge confirmed by someone who also knows the job (and by the few interested listeners who have so far heard the results), and to have my gifts and skills welcomed, understood, and encouraged. And it is deeply refreshing to do this work: to use a technique that comes naturally to me, to engage in a collaboration in which feedback is both honest and positive, and straightforwardly improves the end result. Perhaps the biggest contrast with parish ministry – much as I love it! – is simply the fact of having that clear end result: to be working on something well-defined and easily evaluated rather than nebulous, ever-changing and never-ending.

The joy of this process has helped keep me going over the past six months. Using my gifts to create something and to be able to say “I did this, and it is good”: this is something that is part of the birthright of every human being who is made in the image of God the Creator. I hope to be able to keep it as a central part of my life and work.

And when the bus & truck tour of The Perilous Gard comes to your city, be sure to get tickets!

Krista Paradiso, the artwork contributor, is a United Methodist Elder serving on the south side of Chicago. She’s also a spouse and mom who enjoys difficult questions, modern quilting, high femme fashion, science fiction, and glitter. One day she will get around to blogging so she can have a link to share.

Krista Paradiso, the artwork contributor, is a United Methodist Elder serving on the south side of Chicago. She's also a spouse and mom who enjoys difficult questions, modern quilting, high femme fashion, science fiction, and glitter. One day she will get around to blogging so she can have a link to share.

Of God and Grandma
Scroll to top