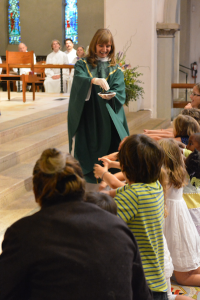 Blessing of the worms for All Saints’ compost bin

I had just arrived a block west of Rodeo Drive to the church I would serve in Beverly Hills. The rector told me not to bring my lunch, that it would be the church’s treat on my first day. I decided that morning that the lunch venue would offer me some clues about how to navigate my future ministry and the people I would serve. Where would we be eating lunch?

When I was a seminarian, part of the thrill of preparing for serving a church community for me was the thought of integrating into the community I served. My bishop told our ordination class, “Be prepared to go anywhere and serve anyone.”

Being a young woman from Central Indiana, ministering to people in just about any place other than the Crossroads of America felt like a great frontier. I read the experience of author Kathleen Norris, a Washington, D.C., native, who discovered a vocation to serve God and God’s people in the quiet monotony of the Great Plains. As she writes in her spiritual autobiography Dakota, “The fact that one people’s frontier is usually another’s homeland has been mostly overlooked.”

I had arrived at my very different frontier: amid selfie-taking tourists, harried traffic, and busy storefronts.

On my first office day at All Saints’, I met the people who called this place their spiritual homeland. And as the noon hour drew closer, it was time for lunch.

There was a French bistro across the way and posh cafés up the street, but my first lunch in Beverly Hills was a hot dog, potato chips, and a salad served on a paper plate. The meal was prepared in-house, courtesy of the Monday Meal program for homeless and food insecure guests of our parish. The clergy, staff, and volunteers share the same meal eaten by the guests each and every Monday.

I learned that day that church members go to the Beverly Hills Farmer’s Market and neighborhood Whole Foods and glean all of the perfectly-good near-expiration food and imperfect vegetables and fruits. For over 20 years, members of the church had committed their Mondays to serving anyone who showed up hungry. Every week the meal becomes a celebration of the edible abundance that otherwise ends up in the landfill.

Looking around the table, I felt as though I knew many of the faces with whom I ate that first lunch. It turns out that many of them were familiar because they appeared in my living room on the television screen as character actors and in films I had watched on Netflix. And there we all were amid the homeless and food insecure in our neighborhood in Beverly Hills.

Over the weeks and months to come, I got to know the parish here in Beverly Hills. Far from being a sleepy country club church, All Saints’ draws members from 96 zip codes across the Los Angeles area. The parish has identified itself as a place that seeks to “be the church of Jesus.”

What does that mean? For us, this begins with a solid identity as followers of Jesus and results in a commitment to radical inclusion. Nestled adjacent to West Hollywood, an outspoken LGBT community, All Saints’ displayed its commitment to inclusion by being one of the first church communities to respond to the AIDS crisis in the 1990s.

One of the most poignant stories I have heard from that time involves a group of men who were dying of AIDS who met in a private home (for safety’s sake) for prayer. In a cultural climate where people avoided drawing near to and especially touching someone with AIDS, this group dared to offer a laying on of hands. For one man in this group, this kind of prayer was something, “the evangelicals did, not us.”

He has told me on multiple occasions that he was transformed by that group and the experience of the power of Jesus in the laying on of hands. For him, this was as much an experience of the healing gift of touch and as a mending of his past negative impressions of evangelical Christians.

I’ve found that today the heartbeat of All Saints’ is found in the mixed bag of the people who make up the church. We say we’ll seek to serve Christ in every person, with God’s help, in our Baptismal Covenant. That means we really mean every person. While some expect to find a sleek homogeneity of wealth at All Saints’ Beverly Hills, they soon discover we’re more of a patchwork quilt of people from all walks of life.

We allow the Book of Common Prayer to guide our worship, and through our shared worship, our belief. That said, on Sunday morning you can experience everything in worship from a said morning mass to choir, organ, and the traditional Rite II Holy Eucharist to an experimental liturgy set to Leonard Cohen tunes played by an amped up band. In every service, we break bread and share wine made holy.

From worship on Sundays, we live as the church of Jesus in the world throughout the remainder of the week. We have a chapter of Laundry Love, offering free laundry to anyone who needs it at an East Hollywood laundromat we take over once a month. On those nights, we load up the quarters and soap into the machines and then while the machines run we share a meal with all who are gathered.

On Saturdays once a month, you’ll find All Saints’ people volunteering at the Islamic Food Pantry down the street. We load up shelves of food alongside our Muslim brothers and sisters.

And on another Saturday, we are the only church in the Los Angeles area who volunteers at the LGBT Center of Los Angeles. There we mentor, feed, and share in community with homeless and runaway youth. Many of the youth have been thrown out of their homes on religious grounds. I have witnessed the surprise and wonder on a teenager’s face when he discovered that we were from a church and that some of our church-going, God-believing volunteers themselves were gay, and were there to feed and love him.

From where I stand, I see All Saints’ as a place that exhibits a unique unity-in-diversity. There’s a prayer in the Episcopal tradition “for the human family,” where we ask God to take away the arrogance and hatred which infects our hearts and to break down the walls the separate us. I like to think that by gathering from 96 zip codes, from all walks of life, a block away from Rodeo Drive, we are through our prayers and experiences doing just that.

The Reverend Allison English is Senior Associate Rector at All Saints’ Episcopal Church in Beverly Hills, California. She received a MDiv from Claremont School of Theology in 2008.

The Messiness of Microaggressions
Scroll to top