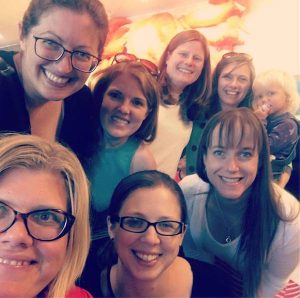 The author (bottom left) and her youngest daughter (top right) pose with Board Members of Young Clergy Women International, 2017.

“You need to develop a pastoral identity. It comes with time. Don’t worry, it will come.”

One of my dearest seminary professors told us this over and over, and I believed him. It would come: I would be able to see myself as a pastor, the more time I spent learning, watching other pastors, performing pastoral tasks myself.

The problem was this: there were precious few pastors who looked like me. I went to the seminary of a denomination that was early in its process (lo, these many years ago, way back in 1999) of ordaining women to ecclesiastical office, a denomination that had resolved its differences for the time by allowing a provisional, regionally based version of women’s ordination. There were 55 students in my MDiv class. Only 5 were women. There was one woman on the faculty of my seminary, and she wasn’t ordained herself. By the time I finished seminary and was ordained, there were fewer than two dozen ordained women in my denomination, and precious few who had, like me, gone straight through college and seminary into ministry as their first career.

During those four years of seminary, the safest place to think about myself as a pastor was the women’s bathroom. The seminary building, designed mid-twentieth century with exclusively male seminarians in mind, had no women’s bathrooms in the area where the classrooms were located. But over by the administrative offices, there was a large women’s restroom with an attached women’s lounge, a holdover from a time when the only women in the building were secretaries. That was the safe place for the handful of us women who were students. I laughed and cried and hoped and dreamed with my classmates in that space. We were honest there, most honestly ourselves, but we had to put up a facade when we left the bathroom lounge.

And so the bathroom was really the only place at my seminary where I could work on my pastoral identity as a female.

I learned to be a woman pastor in that bathroom. But I still had a murky picture of my own identity, because I had precious few places to look for examples.

I left seminary, and went out into the world without my bathroom companions; and I was supported and upheld and prayed for by incredible family and colleagues and congregants. But in many ways I was alone in carving out what it looked like to be a woman in her early twenties who also happened to be a pastor. Whenever I found myself visiting my seminary, I looked wistfully at door to the women’s bathroom. That was a place where I wasn’t alone.

When I’d been ordained for four years, I finally got back to a place where I wasn’t alone.

Through the twists and turns of my first few years in ministry, I had stumbled into a network of women pastors who blogged; and then, an incredible not-much-older clergywoman, Susan Olson, assembled a group of us for a conference; and at the end of that conference, a group of us sat in a room and brainstormed until the Young Clergy Women Project (now Young Clergy Women International) began.

That group defined the decade of my thirties as a pastor. I served, on and off, over that past decade, on the board. I went to conferences. I was active in our social media groups. I met people and made connections through the organization.

But it wasn’t that involvement that made it one of the most integral parts of my 30s. It was the people I met in that room at that first conference, in the rooms after that conference, in the virtual rooms we formed on the internet, and then, ultimately, the women who have become my real-life friends because we connected through YCWI. My best friends of this decade are nearly all people I met through YCWI.

I was present at the board meeting where we set an upper age limit for our membership: at forty, we would gracefully age out. It was one of the best decisions we made when we started out, a gesture of trust and hope that God continues to call people to do ministry and reimagine their pastoral identity in every generation.

I’m easing into my own forties since my birthday late last year. But I can’t help think that I won’t leave YCWI behind. I can’t leave it behind. These women have been my companions and conversation partners, my role models, and my encouragers as I have learned how to be a pastor in the world, in public, outside of the doors of the church, the seminary (and the seminary women’s bathroom). I’m grateful for the legacy of a decade of these friendships, and for the expectation of growing older with my own age cohort.

And I’m excited to see how women younger than me forge community, and carve their own identities as pastors, and how their visions and dreams will shape the Church, and keep those of us who are no longer “young” on our toes as we continue to follow God’s call.

Erica Schemper is a Presbyterian minister and mother in the San Francisco Bay area. After a decade of ministry in a wide variety of settings, she’s currently focussed on the mothering part of her career, with occasional excursions into writing, guest preaching, speaking, and consultancy work for churches.

A Love Letter to My Swamp Monsters

What’s a clergy group to do?
Scroll to top