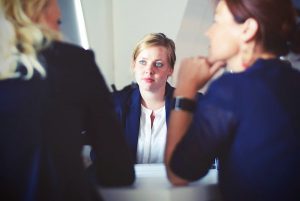 In a clergy group, I’m looking for the unafraid—the folks in ministry who see the turbulent journey ahead as one full of opportunity and excitement for the church, even amid real challenges.

I have a friend, also a pastor. She wants to start a clergywomen group, wants to know what I’d like to get out of a thing like that. We both belong to other groups—with and without men—and we discuss that we’re not sure what we’re meant to get out of those groups, either. We like them—but we can’t tell if they’re for conversation and prayer, hivemind troubleshooting, networking, collaborating, or some hybrid of all of the above.

Of course, all of this prompts the question: What am I looking for in a clergy group? Am I looking for camaraderie—for colleagues in what can otherwise be a solitary calling? Am I looking for wisdom, for the experience and insights only a more seasoned pastor could offer? Or maybe the freedom to be female, and a few cautionary tales from other female pastors who’ve gone before me?

When I try to conjure an ideal, for some reason, my thoughts keep circling back to famous bands of writers or artists who produced in unison and shared an artistic legacy. I think of the Beatniks, Lost Generation, Algonquin Round Table. I also think of Silicon Valley incubators. I think of groups better than the sum of their parts, groups that foster innovation and usher in real breakthroughs.

Ministry in the twenty-first century isn’t for the faint-of-heart, we know. Here on the West Coast, where I live, we can’t take anything for granted. Old models of ministry seem to be failing fastest out here. I am constantly confronted by the very real limits of what I was taught in seminary. Most recently, in conceptualizing the shift happening, I’ve been guided by the thoughts of Alan Roxburgh, author, pastor-theologian, and fellow Pacific Northwesterner, particularly his suggestion that it’s inaccurate and complacent to cling to a narrative about it being the church’s season to grieve. The time for grief is over for most of us, Roxburgh declares, and the way forward looks like faithful, communal discernment.

In his book Joining God, Remaking Church, Changing the World, that discernment happens in congregations. But it will also happen outside of them. I’m hoping it will happen in clergy groups.

We convene peers in any profession because groups can learn from the sum of individual experiences and because those environments can prompt the sort of discussions and spark the sort of creativity that lead us out of professional dead ends. Although I often find myself at the library when confronted by a problem or question, I know—the answer isn’t always in books. When we get colleagues together, we give the Holy Spirit tools and room to work.

Toward that end, I wonder: whom should we invite to such a group, were we to form one? Openness to innovation is a must—but should we require members to also have a track record of innovation? Right out of seminary, when my husband and I were still living in Los Angeles, I worked for a non-profit that convened “islands of strength” (a Peter Drucker term, here to mean churches with such a track record) around particular ecclesial challenges.

It would be, the thinking went, like setting a live wire next to dry kindle. Indeed, it was. These folks met four times over two years (at six-month spacing) and developed context-specific solutions while confronting shared problems. Innovators innovate, and two dozen innovators trapped in a room together—well, they really innovate.

The concern was always: Does this spread? By convening this group of stellar colleagues, are we starting a movement? Or only helping the strong get stronger? On some level, we need both. We need vibrant, thriving churches to throw themselves even more energetically into what the Spirit is doing through them. We also need struggling churches, churches at a crossroads, churches lacking resources and even vision, to tap into that same Spirited work.

The real enemy of innovation—the counter-force to the work of the Spirit among us—is fear. As pastors, we understand this. On an intellectual level, most of folks in the pews understand this, too—but it doesn’t always bear out in the ministry of congregations. I’ve seen fear paralyze faithful, well-meaning people. I’ve seen it eat away at the best-laid plans. I’ve seen it drive out the pastor who posed the question, “What new thing is God doing here around us?”

So, I think, that’s really it: I’m looking for the unafraid—the folks in ministry who see the turbulent journey ahead as one full of opportunity and excitement for the church, even amid real challenges. The ones who devote their energy, passion, and ideas to see collective progress. These are folks who can not only run the metaphorical marathon but who—miles from the finish line—will stop to prop up the runner who has tripped.

And why should that be a clergywomen’s group? There are certainly men doing great work to bring new ideas to the church—I’ve mentioned a few of them already. But the shared experience of female pastors is especially relevant at this time in the history of our faith. Even in times and places where the traditional church model has been strongest, female pastors faced headwinds of prejudice. And even today, in many congregations female pastors represent something new; we are quite literally change incarnate, and that comes with all of the grumbling, questioning, and politicking that accompanies any big change in a church.

In a time when faith has to prove itself to a skeptical society, there is special value in a class of pastors who’ve had to prove themselves all along. In a time when many congregations need to transform themselves to survive, we should look to the insights of pastors whose presence in the pulpit itself is a departure from centuries of encrusted tradition. Clergy groups that capture that spirit and that experience are going to be an important part of the fabric of the new American Christianity.

Therin Fenner lives in Seattle, Washington, with her husband and two sons. She graduated from Princeton Theological Seminary in 2013, was ordained in 2016 while facilitating conversations around new church development, and currently serves as operations manager for Renewal Ministries NW.

“Out of the Bathroom, Into the World”

Redefining Possible: CrossFit, Transformation, and 5 AM Trips to the Box
Scroll to top