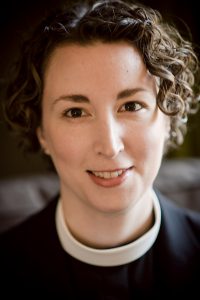 “You come from strong women,” my grandmother said. It was late on a Monday evening in the winter of 1991. We were up late on a school night, and my grandparents were visiting, because I had been confirmed that evening. Granny gestured to the small photographs of her parents that sat in a double frame on the desk in our guest room. My great-grandmother, whom we called Muzzy, was approaching the end of her very long life. We hadn’t known until the last minute whether my grandparents would be spending the week with us or five hundred miles away at Muzzy’s bedside. Looking at the photos, Granny said it again. “Never forget it. You come from strong women.”

I’d heard Muzzy’s story before. In 1924, her husband, my great-grandfather, was found dead in bed of “acute indigestion.” (Someday I will find out what that might have been.) Muzzy was twenty-eight years old. She had four children under the age of seven and was pregnant with her fifth. They had moved from Louisville, the city nearest their hometown in rural Kentucky, to Akron, Ohio, so my great-grandfather could find work on the new streetcar line. Now that she was a single mother, Muzzy knew she needed to be near family. She returned to Louisville, where her sisters helped care for the children and her parents sent produce from their farm to put food on the table.

It was common in the 1920s for the children of widows to be institutionalized in state orphanages. Muzzy was determined to keep her family together, and she reasoned that if she owned a home, the state would have a harder time proving that she could not care for her children. She used the money from her husband’s life insurance to buy a little shotgun house on Greenwood Street in Louisville’s West End. It became my Granny’s childhood home. Muzzy took in washing and sewing, and once her children were older, she went out to work as a seamstress. She did it: through shrewd thinking, hard work, family support, and sheer bloody-minded strength, she kept her family together.

Muzzy was a remarkable woman. In some respects, her life was full of troubles. Her youngest child died as an infant, only a year after his father. Muzzy’s grief must have been immense. She remarried when Granny was a teenager, but her second husband died young, too. She was fired from her seamstress job for speaking up for a co-worker who was being mistreated. Yet she maintained a delightful joie de vivre until her death at the age of 95. She learned to play the guitar after she retired and toured professionally with a band. She loved to travel. A few years before she died, she referred to her neighbors at the nursing home as “the bunch of old people who live here,” as though she were not one of them. Her strength flows through my grandmother, my aunts, and now through my cousins and me. It’s always been a source of pride to me.

As I grew into my twenties and thirties, I began to grapple with another aspect of my family’s history, this one as it related to race. My aunts–Granny’s daughters, my father’s sisters–got interested in genealogy, and their research found that our ancestors in eighteenth-century Maryland had owned slaves. My mother also learned that her ancestor, a justice of the Tennessee Supreme Court, was a slaveowner. Because my four grandparents’ means had been modest, we’d assumed that our forebears had had modest means, too. It was a surprise to learn that they’d been wealthy enough to own dozens of human beings and several hundred acres of land. I would have liked to be descended from abolitionists, or at least from people too poor to have participated actively in the slave economy. But those were not the people who begot me. My pride in Muzzy’s strength and ingenuity became complicated by my shame over the slaveowners who preceded her.

The June 2014 issue of The Atlantic made things more complicated still. I admire Ta-Nehisi Coates’s writing, and I dove into his cover story “The Case for Reparations.” I’m a historian, yet I had never been taught the history Coates describes. Denied access to legitimate mortgages, African-American homebuyers had no choice but to purchase houses at vastly inflated prices from predatory lenders. These thieves–for that is what they were, stealing from black people every way they could–make the mortgage sharks of the 2008 crisis look like a friendly credit union. It was all perfectly legal and backed by federal housing policy.

It took a while for the truth to hit me: Muzzy was able to buy that house and keep her family together only because she was white. If she’d been African-American, either she’d never have been allowed to own a home, or it would have been stolen from her via the legal and extralegal means white people used in those days to take whatever they wanted from black people. If Muzzy had been African-American, Granny and her siblings would have been sent to state-run orphanages. They could have been forcibly sterilized, as was common (and also perfectly legal) in these institutions, and my father might never have been born. My family’s foundational narrative is a tale of strong women, and at the same time it is a story of white privilege.

I know what white privilege looks like. It looks like a white woman in a clerical collar with two master’s degrees and a PhD hanging on her wall. It looks like Muzzy’s snapping dark eyes and sharp nose gazing back at me in the mirror. It looks like me. I exist because my great-grandmother was white.

I don’t often know how to live with this complicated, uncomfortable family history. I am a strong woman; my ancestors would be proud of that. I suspect they would be horrified by this column, the sermons I’ve preached on racial justice, and the work I’ve done with my parish on racism. Probably I have not done enough to horrify them, and that too is uncomfortable. Too often we white people rush to ease our discomfort about race without doing anything to address racism. I don’t want to do that. My comfort is far less important than the terror and anger that people of color feel, in part because of what my ancestors did to theirs. So I sit in my complicated discomfort, trying to use my great-grandmother’s strength to tear down our white privilege.

Raising the Barre: Faith Lessons from the Ballet Studio
Scroll to top