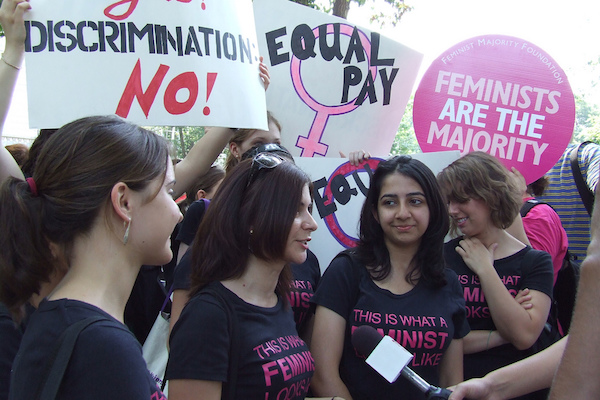 On March 8, 2017, in observance of International Women’s Day, activists called for American woman to strike from paid and unpaid labor, or to participate by joining a protest rally, not shopping or supporting women owned businesses, or simply wearing red to show support for women.

Clergy women made many different decisions about how to observe the day. The question for many came down to the nature of their work, family life, and questions about what the strike might accomplish. Fidelia asked them about their decisions.

Working is a Statement

I can’t leave my chaplain job that day because I’m carrying the trauma pager. In a way, like so many others, I’m caregiving and have responsibilities that I cannot step away from.

I have to lead the ecumenical lent service which I think is more important than sitting at home where no one knows I’m striking.

No One Would Notice

I have the opposite problem from most – my congregation has nothing special happening on the 8th and I often work from home, so I don’t think me just striking would have an impact.

As a single woman and a solo pastor in a small church with nothing scheduled that day, the only creatures who would notice I was striking would be the cats who won’t get fed. I’d have to figure out how to do the rest of my work in an already crammed rest of the week. My clergy group is looking for a small business run by a woman to support at our weekly breakfast meeting.

If I went on strike, the tasks I wouldn’t do, like  leading school chapel, would have to be picked up by another woman. Men would hardly be affected.

I’m a chaplain in a manufacturing plant. In my context, there would be great risk to people’s jobs if they boycotted work. It was the same on day of the immigrant. People talked about not coming in to work, but the reality was they needed the day’s pay.

I work a part-time, hourly job that covers the financial gap for my family. I can’t afford to take it off.

I arranged with my male colleague to switch doing evening church that night, but of course that’s invisible to the congregation. And I have medical appointments, with female providers, for myself and my kid. I may make said kid help me make dinner, and explain the whole thing to him as best I can. But then after he’s in bed that evening I’m leaving him with a sitter and driving to four days of doula training. Am I striking or not? I feel like I’m trying and partly failing.

I’m making a distinction between vocation and work. For instance, I see my vocation as caring for the members of my charge and community, which includes morning prayers and visitations. But it doesn’t include regularly scheduled meetings that bring no joy to my life – that is work.

Questions about the Action

There are a lot of details and layers to this action that we should sit in tension with. To me, women’s equality and simple recognition as basically running the world is what matters to be lifted up. If we can’t strike (or if nobody would notice), perhaps it’s a matter of showing solidarity. I’ll wear red. I’ll go to lunch with my pal at a restaurant that someone who identifies as a woman runs. I’ll take a day off, but, yes, I’ll still be paid. It’s an uncomfortable space to be in, but I hope we keep talking about it, and I’m grateful that this is a conversation.

I definitely hear all of the nuances about intersectionality and privilege and effectiveness around this. I admit to being put off at how the day developed – first as a general announcement with no details attached, then just a date, and then FINALLY actual details about how to participate. I’m still hoping this day can somehow contribute to a larger movement. I work for an advocacy organization with a majority female staff, and with its own Women and Girls campaign. We wrestled with the question of whether we could ultimately do more by continuing to engage in that work on March 8. But in the end, we decided that folks could either work from home so as not to spend money, show up and wear red, or use the day to engage in some sort of action for women (they sent out a list of possibilities).

I struggle that there’s not a clear target and ask of the strike. It could have somewhat of an impact as a demonstration, but it targets employers not government. I do hope the images of solidarity will be powerful, but I don’t think it will change any minds of those we need to change, and I don’t think it targets and pressures the power holders who can make changes. I will still be in solidarity, even if I do think the strike needs more thought and requested outcome to have the power.

I’m going to devote my day to researching how to create and introduce a resolution to our diocesan canons around parental leave.

In my work I primarily serve other women, so I won’t take the day off. I will, however, refrain from making any purchases, and I will wear red.

The other businesses in the local merchant group in my community are decorating, wearing red, and providing a 20% discount to women that day. I wish I could participate with them but have no idea how to do as as a church.

And that is significant. You care for others through that job. In case you feel any guilt, please release those feelings. Feminism has always been about solidarity between women – supporting one another’s right to choose. Solidarity sister. I’ll have my red on that day. Maybe you will too.

Praying with Our Farmers
Scroll to top