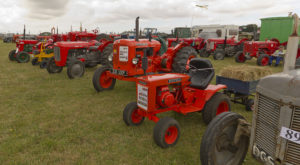 Like many good ministry ideas, this one came about by accident.

I interned at two small, rural churches during my second year in seminary. At one of the churches – on my first Sunday there – the pastor invited me to the front of the sanctuary to introduce myself. He asked me to share two fun or interesting facts about myself. When put on the spot like this, I always seem to draw a blank and end up saying something weird. This time, I shared the fact that that when I was a kid my favorite toys were tractor figurines. What I said was absolutely true, but it probably would not have been all that interesting to the vast majority of people.

Only, I wasn’t talking to the majority of people: I was talking to farmers. It was probably the best thing I could have said to ingratiate myself with the people of this church. I was a local girl from another rural county about a half-hour away. I loved tractors, and I happened to be dating a dairy farmer (who is now my husband). They loved me. My internship went well, and I didn’t think about my embarrassing introduction again until about a year later.

Someone from that church called me up and asked if I’d be willing to lead worship early on a Sunday morning at an antique tractor show they were organizing, since they knew I really loved tractors. I immediately jumped at the opportunity because it seemed so unique. It wasn’t until I started planning that I realized I had potentially bitten off more than I could chew. What would the setting be like? How long should this service be? Would there be a microphone? What should I do about music? What exactly does one preach about at a tractor show? This final question was what I spent the most time worrying about. I wanted to say something relevant, but I was afraid that if I went with a Scripture passage with too much agricultural imagery I would either look like I was trying too hard, or I would show how much I don’t understand about agriculture when I tried to preach on it.

The service was under a canopy, with everyone sitting at picnic tables. There was no microphone. I ended up preaching on Psalm 118:24: “This is the day that the Lord has made; let us rejoice and be glad in it!” I thought this passage would be good in an outdoor context. On this, I was absolutely correct. I had everyone sing the song “This is the Day”, and as we were singing the mist was rising from the grass around us, and sunlight began to filter through the trees. From the hilltop we were standing on, it was easy to remember that we were part of God’s magnificent creation. And then some of the exhibitors began starting up some of the machinery. I have never preached over farm equipment before or since. I hope to never do it again. I did ok – considering I had no microphone and we were outside – but the noise and distraction of tractors driving by was a little much for me and those worshiping with me. I think I ended my meditation a little earlier than I’d planned.

We took an offering by passing around a man’s hat. After I prayed to bless and multiply it and help it to do God’s work, I asked what the offering was going toward. It was going to pay me. The next part was the important part: the prayer. It was very important to everyone that I pray for their tractors. I will admit that I stumbled a little on how to do this. I was aware from my then-boyfriend’s family, that antique tractors are often still used as working farm equipment; showing them off is just something done on the side. I prayed for the farms. I prayed for the animals. I prayed for the food that would be grown. I prayed that the farmers and the tractors might work together to help feed God’s world. I also prayed that the tractors would also bring joy. No one seemed to think this was too far; they thought it was perfect.

After the service I went to collect the free breakfast that was also part of my pay, and a man stopped me to ask me something. He asked me about the place in the Bible where Jesus says that anyone who puts his hand on the plow and looks back is not fit for service in the kingdom of God (Luke 9:62). He wanted to know what Jesus meant by that, since plowing necessitates looking back to make sure everything is going correctly. This farmer’s theory was that Jesus didn’t know how to plow, since he was a carpenter. I will admit that I had nothing insightful to say here. I knew nothing about plowing. I was not interested in plowing. I had read this verse, figured it meant something about keeping looking and moving forward, and given it no additional thought. This man’s question had me stumped. I told him that I didn’t know, but that it was a very interesting question. I admitted I didn’t know much about plowing. He then explained the process of plowing to me, and we went our separate ways. I made a mental note to do more research on agricultural metaphors in the Bible if I was going to keep doing rural ministry.

Many farmers are not able to get to worship regularly because of the work they do on the farm. Perhaps the most important part of this worship service was the fact that the organizers and I brought worship to these people who might not be able to go out to worship on an ordinary Sunday. Ultimately, that is the job of ministry: to bring God into people’s context, and help them to see how God is working in their lives, even if, in the process, we sometimes have to stumble and admit what we don’t know.

Rebecca Lawson Putman grew up in Byram Township, New Jersey, attending a Pentecostal-leaning PC(USA) church. She studied German at Ursinus College, earned an MA in linguistics from the University of North Texas, and then taught English as a Second Language. She went to seminary at Princeton Theological Seminary and graduated with an MDiv in 2015. Rebecca serves as the solo pastor of the Northville United Presbyterian Church in Northville, New York. She is married to Gregory Lawson Putman (the former dairy farmer), and their family also includes three cats and a rabbit.

Young Clergy Women, on Strike or Not

Meeting God in Broken Places: A Review of The Shack
Scroll to top