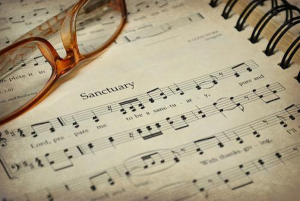 “Immigrants and Refugees Welcome.” In resistance to the Executive Order banning refugees from seven majority Muslim countries and discriminating against Muslims, those have been the words on our sermon boards on both sides of our church. Until the Executive ban is fully rescinded, until ICE (Immigration and Customs Enforcement) is no longer directed to raid immigrant homes in our community, and until DACA (Delayed Action for Childhood Arrivals) candidates no longer live in fear of unfair deportation, that sign will continue to hang prominently in front of the church I serve: The New York Avenue Presbyterian Church in Washington DC. As Christians seeking after God’s justice and because of our physical positioning — just four blocks east of the White House — we feel a deep calling to stand up as a Sanctuary Church.

Last spring Kathy Doan, a ruling elder at The New York Avenue Presbyterian Church and a longtime advocate for the immigrant community, and Maricelly Malave, Co-Founder of Sanctuary DMV (District Maryland Virginia), met with me to share an evolving need for churches and communities to join the New Sanctuary Movement. They shared the history of this ancient practice for temples, churches, and even whole cities to declare themselves as a place of refuge for people accused of crimes in which they feared unfair retribution. They shared that churches in the U.S. first provided sanctuary as part of the Underground Railroad, helping slaves pass to freedom during the Civil War. In the 1970s, when refugees from the civil wars in Central America came to the United States seeking shelter, the U.S. government did not recognize them as political refugees seeking asylum. Many were deported and faced death squads on their return. In response to this dire situation, the Sanctuary Movement was formed. At its peak, there were over 500 member congregations. In 1986, the Sanctuary Movement won the inclusion of Central America as part of our immigration laws.

Starting the summer of 2014, we started seeing the return of the humanitarian crisis with thousands of unaccompanied minors fleeing violence and forced gang participation in Central America seeking safely in the United States. Moreover, eleven million undocumented persons are living in the United States, many of whom have lived here for more than ten years. These members of our community — these friends, family members and neighbors — are all at risk of deportation.

In the fall of 2016, Kathy and Maricelly gave a presentation on the Sanctuary Movement. In October, the governing board of the church voted to form a task force to study what it would mean to sign on as a sanctuary church. Days before the 2017 presidential inauguration, by a vote of the Session, The New York Avenue Presbyterian Church joined with over 400 churches across the country to make the following public pledge:

As people of faith and people of conscience, we pledge to resist the newly elected administration’s policy proposals to target and deport millions of undocumented immigrants and discriminate against marginalized communities. We will open up our congregations and communities as sanctuary spaces for those targeted by hate, and work alongside our friends, families, and neighbors to ensure the dignity and human rights of all people.

This pledge affirmed the church’s role in the Sanctuary movement consistent with the church’s mission to be an inclusive, justice-seeking congregation trying to live out Jesus’ command that we welcome the hungry, the naked, the estranged and the outcast. In signing the pledge, the church committed to hang an “immigrants welcome” sign out front of the church, to connect the church with those working in the field, to educate ourselves and then advocate for the needs of those seeking sanctuary, and to inform immigration service providers that the church is willing to provide sanctuary. Due to of all of the details that still needed to be discussed, in January the church did not commit to physically housing individuals or families.

Since January 20, we have seen policies, words, and inaction out of the current administration that deeply hurt immigrants, refugees, and both the Muslim and Jewish communities. We are hearing immigrant neighbors say that they feel so scared that they are afraid to go to public spaces. Some are afraid to send their children to school. We have felt that our Christian faith has been deeply challenged, and that the justice of God is under deep threat and abuse.

On the steps in front of the church, just days before the Executive Order (EO) was issued, we hosted a press conference put together by Church World Service, The Presbyterian Office in Washington, and Faith in Public Life, standing up against the then-proposed EO barring refugees and discriminating against Muslims. The words from Rev. Jimmie Hawkins, the new Director of the Presbyterian Office in Washington, resonated with me: “Now is the time for the faith community to stand up for immigrants and refugees. Now is the time to stand up for our common humanity.”

Since then, we have created a petition asking Presbyterian members of Congress to stand for their faith and against the EO. We sent in the petition with over 1,100 signatures from our congregation and from churches across the country. Our church has joined in the “No Muslim Ban” protests against the Executive Order. We have gathered in front of the White House, at the steps of the Capital, and at the Washington Monument protesting the current administration’s policies against immigrants and refugees. We, including congregants from ages two to eighty, have gathered after church and walked the four blocks over to the White House to add our voices to the many in protest. We have shared the Session’s decisions with the congregation in worship and in our weekly newsletter. The Sanctuary Taskforce has continued to gather and attend citywide meetings on how we can best live into our commitment, and support both the immigrant community and places of faith. We have begun to train our staff and members on how to respond if someone seeking sanctuary comes to our door. Already we have visitors from Iran and Mexico wanting to learn more about our work as a Sanctuary church. Looking to the future, where there may be a very real need to take a long standing member of our local community into sanctuary, we have begun the planning of the necessary details: where the person would sleep, shower, and eat. We have also planned for legal representation for the church.

We continue to learn and discern where we are called and how we live into our new identity as a Sanctuary Church. We know it will not be easy and there is risk involved. But since becoming a Sanctuary Church, we have witnessed new wellsprings of activism and engaged faith in our congregation. We hope that you join us in this calling too, and that as sisters and brothers united in one faith, one baptism, and one Lord, we may together to live into our shared faith where all are held up as beloved children of God.

For more information and for sources for this article, please visit:

Alice Rose Tewell is the Associate Pastor at The New York Avenue Presbyterian Church in Washington DC. She is passionate about urban ministry, children’s and young adult ministry, and embracing new ways to be resistant to the ways of the world that are in opposition to the Triune God of justice and peace. During the springtime, her favorite spiritual practice is worm composting - drawing her and her family back to God’s creation. Alice lives with her husband, young son, and dog in Arlington, VA.

Becoming a Bat: A Pastor’s Journey in to Aerial Arts

What White Christians can Learn from Get Out
Scroll to top