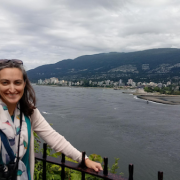 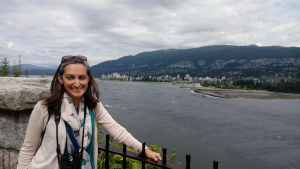 The author and her binoculars

My husband John and I were on our honeymoon when I was first introduced to what has become my most beloved pastime. Relaxing in a mountain cabin at the end of the winter, we enjoyed our first week of our marriage by feeding and identifying birds. “There is something Eden-like about it,” my husband had remarked sometime after we had identified a flock of juncos (and before I dropped his binoculars into the creek, ruining them). The following Christmas, I bought him a pair of water-proof binoculars to replace the old ones. He had also unknowingly suggested that his parents buy me a pair. I found this out just in time to jot a note on my gift to him: “So that you and I might share a day in Eden.”

More than a decade into marriage, and longer than that in ministry, I doubt either of us would now assert that Eden is well-represented by vacation. Perhaps closer to the story of Eden would be the act of identification: identifying a bird and calling it by name, which was, after all, one of Adam’s first works in Eden.

The best hobbies and interests allow us to follow our curiosities endlessly, however, and over the years I’ve found even more enjoyment from studying bird behavior than from identification. You can know what a bird looks like, maybe what calls it makes, but there is so much more: how it behaves at the feeder or with its young, how it builds its nest, when and for what reasons it migrates, weird things it does (waxwings watching the sunset, for example), whether it forages alone, with a mate, or in a flock (or like juncos, who could do any of those), whether it flocks with a different type of bird (as white-breasted nuthatches and purple finches sometimes do). Where I live, I have also learned to predict snow with reasonable accuracy by the presence and behavior of white-crowned sparrows under my feeder. And always, there is more to learn. Were I to live several lifetimes, there would be more to learn about birds, their behavior, and their habitat, and it is the kind of knowledge that does the soul good.

Finding, watching, and enjoying birds works on my soul to mend something that I think is broken in me. Anyone else who struggles to keep their attention on a given task will appreciate that with birding, the distraction is the focal point. But attention slowly becomes reverence, which nurtures affection for the place around me. And affection for a place awakens a sense of responsibility for its well-being, even if it does not teach me how care for that place.

This has given me a deeper understanding of why I have given birding so much time and attention, and why it occupies my thoughts both traveling and at home. To speak again of Eden, birdwatching reminds me of God’s first command and purpose for humans: to nurture, order, and co-create with God.

When I go out looking for birds, especially warblers and other birds typically only seen in the wild, I might hear a lot of noise up in the canopy, but I often do not see anything very interesting for a while. This gives me time to arrive, again and again, at the understanding that the birds are not there for me. They are not singing so that I might find them. They are usually not curious about me. Quite the opposite. They speak in code to find each other without me seeing them, with a barely audible, “chit…chit.” They keep in near-constant motion, so my nice binoculars have difficulty finding them. They sing their longer songs from hidden locations. And really, who am I to be trusted with their location? Can I honestly say that I mean them no harm?

The birds are not there for me and my enjoyment. And yet, when I finally settle into the moment, confessing in my heart the prayer that indeed, they are not there for me, that I am not the center of the experience out in the woods that day, it often happens that, very soon after, I will see something wonderful. Then, and only then, is the gift truly given, like the grace of God. I can go to a place and open myself up to its wonders, but only gift can let me into the world of little wings.

Although I still carry a bird book and binoculars on trips, birding has helped me fall more deeply in love with the place where I live. With the exception of birds that live exclusively in different regions (like my favorite, the scissor-tailed flycatcher), there are places within fifteen minutes of my home where I can see as many birds as I might see traveling anywhere in the southeastern United States I have become more attentive of late to the gifts of what can be seen and witnessed near the place where I live, which in turn inclines me toward its best care and nurture. Thus, what started as something my husband and I did on a trip has become something that leads me back home. And there’s something Eden-like about that.

Amber Inscore Essick and her husband John co-pastor Port Royal Baptist Church, a rural congregation along the Kentucky River. Her three children, Olin, Leif, and Wren, ensure that there is no shortage of questions, laughter, singing, or shenanigans in and around the church.

Finding Love in the New Year

Blessing our Caregivers
Scroll to top