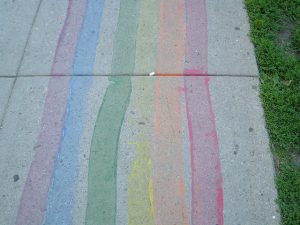 In the early 1990’s, Saint Mark United Methodist Church in Atlanta, GA, like most downtown Atlanta churches, was struggling. Members had moved out of the city center and into the suburbs, and were no longer willing to drive back to their home churches. So the suburban churches thrived as the in-town area crumbled. Real estate prices plummeted. The streets were vacated. The 1980s were not good to Atlanta’s heart.

The only folks who seemed to be moving into the midtown and downtown areas were folks who didn’t feel welcome anywhere else. The 1980s saw a surge of single, gay men buying up property and settling into the area. Things started changing.

The Pride Parade began in Atlanta in the 1970s, and took off in earnest by 1981, around the same time that the AIDS virus began to be diagnosed in the community. If you read the history, you’ll see that these two events – a celebration of life and the staggering defeat of death – walked hand in hand throughout the 1980s. It was a heartbreaking time. As the Parade gained strength and turned out record numbers, opposing responses also grew more public and hateful. Across the street from Saint Mark UMC stood Atlanta First Baptist Church. The protests were increasing by the year. One year, a long-time church member recalled, the Baptists across the street hired guards on horseback. Then, it was violent and absurd. Now, it’s laughable: “What did he think we were going to do? Break in and redecorate?!”

Like most of the in-town churches, Saint Mark UMC, which had been a thriving and active church for the better part of the century, dwindled to about 100 folks by the late 1980s. But, this church has always had a history of social justice and activism in the world. Bishop Bevel Jones, who served as the senior minister from 1963-1967, dubbed Saint Mark “the bellwether church of the southeast,” and it’s true. This congregation was filled with folks who always had the courage to stand up and do what was right, for the sake of the Gospel. When it was apparent that the church was in danger of closing its doors, the people who remained took their call to be the church in the world seriously. They decided that they were going to do what they had always done, which is to minister to the people in need in the community surrounding the church.

The next June, on the Sunday of the Gay Pride Parade, as the Baptists picketed, the old folks, young couples, and scant numbers of children from Saint Mark UMC sat outside with a banner that read, “All are welcome here!” and handed out flyers and cups of cold water to the parade participants. What happened next could have only come as a result of the Holy Spirit blessing this church’s willingness to stand up and say: We are here in love, not hate. We open our doors to all, because that’s what Christ has called us to do.

The next Sunday, people came to see if Saint Mark UMC meant what it said. The following Sunday, those people brought other people with them. By the end of the year, membership had tripled. Saint Mark UMC regularly had 200 visitors on a Sunday, though earlier days had seen barely 100 members in the pews.

The 1990s and the turn of the millennium saw renewed life at Saint Mark. It was referred to as the “Miracle on Peachtree.” During that time the congregation grew to over 1,900 members, an especially miraculous renewal considering that the church had been on the verge of closing. Saint Mark UMC was the first Atlanta church to begin an active AIDS ministry, and as they welcomed in hundreds of hurting and dying people, they also buried more than one could imagine.

Nine years ago, I was appointed to serve St. Mark UMC. As is true for every congregation, each member has a story to tell. But in this congregation, there exist distressingly recurring themes of abandonment, disownment by family and church alike, and a subsequent re-claiming of one’s place in the family of God in Christ. There is an amazing children’s ministry, which looks like the whole of the kingdom of God, as these children have come from all over the globe to be loved and cared for by wonderful people. The witness of these loving parents remove any misguided speculation that same-gendered parents are eroding traditional morality. I watched, week after week, growing into the knowledge that there is no room for hate in the kingdom of God. Each person’s story I hear is a testament to that.

During my time there, I listened to hundreds of stories that began and ended the same way:

“I grew up in the church,

I was nurtured and loved by my church.

I found my pathway to faith in the church, and then…

the church learned I was gay.

Then, the church no longer welcomed or loved me.

The church turned her back on me.

But, God relentlessly pursued me, and I found my way back.

I finally found a place where I was affirmed as a beloved child of God,

There are hundreds of other stories, though. Thousands of people who left the church because they were so hurt by it that they couldn’t bear the hypocrisy or shake the shame they inherited from the narrow-minded or hateful people.

And my great shame is that my denominational home is one of the last in our country to extend full rights of inclusion and embrace to the LGBTQIA community. To date, the United Methodist Book of Discipline still prohibits clergy from celebrating the unions of same-gendered couples, and “self-avowed, practicing homosexuals” are prohibited from consideration for ordination, and deemed “incompatible with Christian teaching.” I am deeply ashamed of the position my denomination has maintained since 1972, and especially because of my time at Saint Mark UMC, I find myself working consistently to push against and change the nature of the church.

In arguably the greatest sermon ever preached, Jesus said to all who could hear, “You have heard it said…, but I say…”  This stanza is repeated multiple times in Matthew 5, during the course of what we call the Beatitudes. Jesus reminds us over and over of who are blessed and who are welcomed. I have embraced this language as the mantra for my own ministry. Jesus was a subversive force, pushing against a stringent interpretation of the law and demonstrating how to act with love and mercy in favor of exclusion and judgment.

I have chosen to take a stand for the LGBTQIA community because I have the privilege to do so. I do not fight for this community in The United Methodist Church because I am a member of it; I fight for this community because the injustices exercised against my siblings in the UMC are stripping the church of some of its most vital, talented, beloved and passionate followers of Jesus Christ. I have watched as gifted and called members of the UMC have left to pursue ordination in other, more welcoming, denominations or traditions. I have wept as other have left the church altogether. I have worked with colleagues to find creative ways to “celebrate” same-sex unions, and observed from the sidelines as beloved friends have exchanged vows in courthouses because the law was more open to them than the proclaimers of the Gospel. Most heartbreakingly, I have had to bid farewell to congregants who, for no reason other than the denomination’s unwavering and exclusive position, have felt the need to leave my church to join one in a denomination where the fight is over.

For as long as I am able, I will stay in the United Methodist Church and work to fight for the rights of the people who have shared their stories with me. I will stay in the United Methodist Church and continue to push as hard as I can from the inside, with the hope that the circle can be widened to include the embrace of all of God’s people. I have worked, recently, to author legislation of Non-Conformity with the Book of Discipline in the Cal-Pac Annual Conference, which has had a long-standing tradition of inclusion and acceptance of the LGBTQIA community. I do so with conviction, because I can see the people the church has lost, and I know how marvelous and diverse and beautiful it will be when we can find our unity in Christ, once again.

Here I stand, a straight, white clergywoman, mother of three, and witness to the need for the church to persist in her longing for justice.

Here I stand, working to widen the circle, so that all may come to know the grace of God’s love in Christ Jesus.

Mandy Sloan McDow is a native of Knoxville, Tennessee. She attended Oglethorpe University in Atlanta and Princeton Theological Seminary. She has served West Farms UMC in Farmingdale, NJ, Bethesda UMC in Adelphia, NJ, Grace UMC in Atlanta, St. Mark UMC in Atlanta, and currently Laguna Beach UMC in Laguna Beach, CA. Mandy holds a black belt in Taekwondo, makes music whenever possible, enjoys cooking (but loathes making dinner), and is the deeply proud mother of Jackson, Cooper and Sloan, their curmudgeonly beagle, Edgar, and two impossibly small dogs named Posey and Lola. Together, they watch a lot of baseball.

My Sisters, the Ghostbusters
Scroll to top