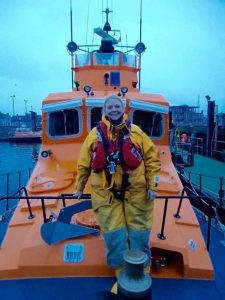 The author on one of her solo adventures

During my mid- to late-twenties, I went through a phase: Everywhere I went, I met Scottish people. I even found some in Mexico at an all-inclusive resort where my mom and I were vacationing. Every time I met Scots, I thought, “These are my people.” And they all assured me that I was right, and that I really should come over and see the place that produced all these fantastic folk. I absolutely believed them.

But whenever I tried to plan a trip, none of my friends had the money to travel internationally, or no one could get the time off work. I had done my fair share of solo domestic travel, including lots of long-haul driving across broad swaths of the U.S., but my international travel had always been a group thing.

At the end of my twenties, however, I had become restless. On my thirtieth birthday, I decided to do a bunch of things that would just make me really happy, so I got a new tattoo, played a gig with my band, and sat in with some musician friends at their later show. Then I came home, summoned up the horrible dial-up internet in my parsonage, and booked a flight to Glasgow. That trip ended up being a transition for me in more ways than one, as I soon accepted a new call and used my journey as the break between the old church and the new.

I arrived with one night booked in a hotel, and absolutely no other plans for two weeks. Despite my jet-lag, I dragged myself to the pub around the corner. It’s a rarity for women to go to bars alone here in the U.S., but even more so there; nonetheless, I found my people almost immediately. While religion and politics are taboo social topics here, they’re expected topics of conversation in Scotland. The regular crowd at Blackfriars adopted me and showed me around town. I met new friends over oysters at Rogano. After a week, I had to drag myself out of Glasgow to see some of the rest of Scotland, because the fabric of that city just draped so well on me. The rest of the country did nothing to disabuse me of the idea that these were my people, and I’ve now gone back many times. I’ve had long conversations with strangers whose names I caught only in passing, been invited on the most ridiculous adventures, and developed friendships that grow deeper with every visit.

I don’t think very many of those things would have happened if I had traveled with even one companion. I have now been there in groups as well as alone, and I still meet people, but the dynamic is different. I am primarily committed to the people with whom I came. The people we meet are rarely compelled to invite a group to share in their lives in the way they are quite willing to do with a single person. No one has ever offered to take a group of us out on the Moray Firth and make us a training exercise for the coast guard.

I fell in love with solo travel on that first trip to Scotland, and I try to take at least one trip each year alone. I meet far more people and form better lasting connections, which is the extrovert’s dream. I always learn something about myself, especially when things aren’t the extrovert’s dream – when I’m in a country where no one speaks English and I can’t manage the local language; when I’m stuck alone in the cultureless vortex of an airport or—God help me—an airport hotel; when I’m driving by myself for hours across a foreign landscape, unsure of whether I can even read the signs correctly. The peculiarities of public transportation bring out a side of me that makes me glad no one I know is there to see.

Traveling alone makes me a better minister. As pastors, we spend so much time taking everyone’s needs and desires into account, calculating benefit and risk not just for ourselves but for a large group of people. When I travel with other people, I find myself still doing that – which is as it should be when I’m with people. Traveling solo, however, is the one time when I can shut off all those voices and really listen to my own soul.

This year I took an extended trip to Scotland, Northern Ireland, and Portugal by myself. It was only when I arrived in Glasgow that I began to realize how deep my exhaustion ran. With other people, I would have pressed on to see all the sights and do all the things. Extrovert style. But this extrovert was tired. So, when I woke up and wanted nothing more than to lie around and watch British television and eat toast in my rented flat, that’s what I did. When 7 p.m. rolled around and I had done nothing but write and sleep all day, I took myself out for a fantastic dinner. When my extroversion couldn’t take that anymore, I went out with friends, or alone. I booked spots on day tours with an hour notice and ate mussels fresh out of the bay in Oban, or walked the beach in Cascais, or explored the castles at Sintra. I listened to fado and traditional sessions and indie rock, and took the subway to street festivals, and jumped on a bus to a distillery. I met locals and travelers from all over the world. I slept, and I wrote. It was glorious. It allowed me to return with energy to do the work that I love, that involves so much listening to everyone around me, because I had the time to listen to myself.

I have been known to joke that other people have children, and I have plane tickets. It’s not entirely a joke. The life that I have chosen is a little off the beaten path (sometimes literally), but one of the luxuries it affords me is that I have the option of doing this thing that I’ve come to love. I get to know the world, and myself, a little better every time I go. I still love traveling with my friends and family, but I also think I will always keep flying solo.

Rev. Stacey Midge has been ordained in the Reformed Church in America for thirteen years, and currently serves as an Associate Minister in the First Reformed Church of Schenectady, NY. On the side, she’s a musician, hockey nut, and dog servant, whose Facebook page might suggest that she travels more than most people can comprehend. She was a founding board member of the Young Clergy Women Project and is delighted to contribute one more article to The Single Rev’s Guide to Life before she ages out.