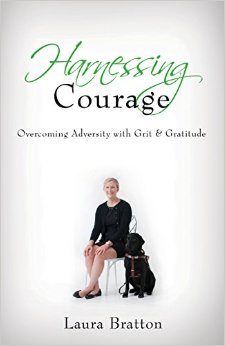 Over the years, I have often wished that “regular” people better understood life with a significant disability. As an Episcopal priest who is completely deaf, I’ve struggled with the writing of authors who were able-bodied and exploring disability as a theological construct or something which needed to be overcome. As a hospital chaplain and a parish priest focused on pastoral care, I need something written from the inside, which described both the highlights and the lowlights of life with a significant disability, and which asked the reader to engage the author as an intellectual equal.

Laura Bratton’s book, Harnessing Courage: Overcoming Adversity with Grit and Gratitude, is an excellent entry into this category. The story of one young pastor’s journey into blindness and the world of disability resonated strongly with me, and it has the potential to fill that niche of dialogue with those who have no disability and who seek to understand. It will also be a useful tool to those who are beginning to work through a new diagnosis which may result in disability.

Laura is a strongly optimistic person. Her default is a positive outlook – as the title suggests, she powers through challenges using inner grit, and remains positive by naming people and situations she is grateful for. I deeply appreciate her frank discussion of her struggles with anxiety and depression and her often frustrating discoveries that her vision would at times define her life. This frustration and anxiety are emotions which need to be more often named in our society. Her work is especially strong when she speaks of mindfulness, and practicing with a spiritual director. I most appreciated how she returned to her anxiety and fearfulness throughout the book, so that she did not depict either her low vision or her emotional turmoil as a “one and done, I’ve conquered it” issue. Bratton does not shortchange the ongoing adjustments that her low vision has caused in her life. She is clear that making peace with her low vision, and working through her anxiety, would be a lifelong, repeated work. I too experienced this struggle as a child losing hearing, and it was frankly soul-lifting to have Bratton name these truths.

“Harnessing Courage” is a most apt title. It took a while for Bratton to introduce us to Jira, her first guide dog, but the book took off once she introduced this profound relationship. Through that relationship, the reader can better understand Laura’s relentless optimism. It is ethically powerful that the story is not told as “This blind person is so courageous and has conquered life”, but rather as “These are the people, creatures, and help which have helped me find the courage to life my life fully.” That distinction is so important – her choices and actions were done by Bratton, not done to Bratton.

The book has several main strengths. Her experience in her Guide Dog Schools and with those animals is an excellent and at times searing, exploration of love, grief, and the courage it can take to work through anxiety and to seize joy. Her open admission and discussion of anxiety and depression is so timely in our culture. Her choice to be joy-filled, and her discussion of using Non-Violent Communication methods are important factors in conversations we all have on a regular basis, and a useful tool for pastors to consider.

This book would appeal to a variety of readers and situations: a grief group or a pastor working with a grieving family would find her emotional honesty interesting. Persons considering getting a service animal would learn a great deal about the benefits and drawbacks of such an animal. I won’t give away any spoilers, but she speaks of an eight-month period where she really actually FELT disabled, and I knew exactly what she meant. Those of us who grew up with our disability often don’t feel it as a disability in the way that non-disabled people seem to expect. Bratton describes such a period as well, and I commend her for sharing that time – harrowing as it clearly was – because that part of the disability story is so important. Chaplains, interns, residents, and other pastoral care providers should carefully read that story, in order to learn how to honor the other person’s reality.

As with any relatively young author, there is room for growth. At times, the story drags a bit. While Bratton’s optimistic nature is an outset, this tone can be overwhelming…I may have felt a little sunburned by the optimism in the first few chapters! I feel she doesn’t really begin to develop a sense of balance of shadow and light until she meets Jira.

As a clergyperson, I would have expected greater attention to Bratton’s call story. In much of the book, theology and faith are secondary to her own personality and reliance on self and family support. Her decision to go to divinity school felt a bit abrupt. She speaks of her family’s faith practices, but I was not positive of her tradition until later in the book (she’s a United Methodist). She does not speak of a family church, nor does she delve in depth into her relationship with God – she reaches out to God in prayer, but I didn’t get a clear sense of anger, struggle, or relationship. The story of her faith seems peripheral to the story of her life…until she herself becomes clergy. However, once she speaks of her spiritual director, her faith practice and spirituality begins to merge more significantly. Theologically, I would have expected more depth, but it is also true that Bratton’s authenticity in voice came through as it is, and that more extensive theological reflection may have felt disjointed from Bratton’s narrative.

Ultimately, this is a worthy book. The jaded, cold-hearted New England cynic in me wanted to brush it off, to say that this sunny Southerner didn’t know was it was like to really struggle through a disability, or that any person who is that optimistic is just out of touch. But midway through the book, I was clutching Kleenex, curled up in my reading chair, as (in the book) Laura curled up on another floor in her own grief, telling me how she felt really disabled. She gets it.

Bratton may be optimistic, in a bright Southern sort of way, but she understands and articulates the world of lost senses as only an insider can. As a young author she will hopefully have chances to continue to grow as a storyteller, but she is not too young to tell and validate this story. This book should find its way into our parish libraries, our hospital chaplain resource libraries, and our own personal reading lists.

The Rev. Elizabeth Tesi is an Episcopal priest, currently serving as the Associate Rector for Pastoral Care in St. John's Norwood Parish, Bethesda-Chevy Chase, MD, just outside Washington, DC.  She holds her board certification as a professional chaplain. She was ordained in 2004, and has served parishes, hospitals, and law enforcement agencies as both a priest and a chaplain. Her main professional interests are pastoral care and counseling, supporting the academic preparation for those entering chaplaincy, and calling out implicit bias. She is completely deaf, has a cochlear implant, and has struggled against ableism for most of her educational and professional life. Her strongest two beliefs are that all people are made in God's image, and that all people are not very good at audio-only phone conversations. She lives in Washington, DC with her husband, their elderly cat, and their young puppy.

A Hammock and a Window
Scroll to top