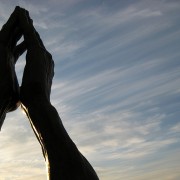 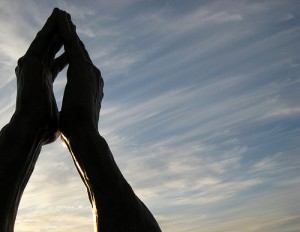 I know I’m a little late to the game, but two weeks ago my husband and I went to see the movie Gravity, starring Sandra Bullock and George Clooney. I thought it was a decent movie, but not worth all of the awards it has won. That being said, there was one part that struck me particularly hard, and that I believe has implications for Christians.

Sandra Bullock’s character, Dr. Ryan Stone, is a scientist turned astronaut on her first mission. Things go horribly wrong, and she ends up as the sole survivor after a series of disasters. At one point, she is in a Russian space capsule, trying to get to a Chinese station, to get back to earth. The only problem is that she is out of fuel and can’t reach Mission Control in Houston. She hears a man speaking in presumably Chinese, and tries to communicate without much success.

No one taught this woman how to pray. And I began to wonder how many people in our churches have never been taught to pray? Or perhaps are not comfortable praying? Praying is simply being in conversation with God. It may happen verbally, through music, art, cooking, gardening, sewing, silence, walking, and so much more.

It’s easy for me as a pastor to say, “praying is simple conversation,” yet, every week at Bible Study or at a meeting when it comes time to pray, people sit and stare at one another. No one will look at me. It’s like being back in school when none of the students did the homework and are hoping against hope the teacher will call on someone else. And I wonder, where have I as a pastor failed?

Growing up, my pastors, Sunday School teachers, other church members, and my parents modeled prayer for me. I learned by watching and participating. I learned by experience. Prayer became a part of me and my life. I thought others who grew up in the church learned the same way. Little did I know that this isn’t true.

Somewhere along the line, we as pastors have stopped expecting much from our laity. Perhaps it was after families started needing a two-income household to make ends meet. Perhaps it was gradually over time as ministry became more and more of a professional field where we pay a pastor to do the ministry on our behalf. Or maybe it was as a result of trying too hard to make church accessible and lower the bar of expectations in an attempt to seem “hip” and “cool” with a society that was rapidly leaving church in the dust as the religious “nones” grow faster than any other religious group. Regardless of how we got here, the fact is that somewhere along the line we stopped teaching discipleship.

However, I think that all hope is not lost. Sandra Bullock’s character is the quintessential American who has a passing knowledge of faith, but doesn’t truly understand anything about it. Her character is facing what seems to be imminent death, and all of a sudden she is concerned with the afterlife and the state of her soul. Faith becomes real in the midst of tragedy.

And therein lies the beauty of this situation. Dr. Stone is opening herself up to the possibility of something more, something greater than herself. She is curious and desires more. As a Christian, whether pastor or lay member, it is our job to help her and people like her. It is all of our jobs to pass on our faith to others. We don’t have to have the “right” words to say or a special knowledge of the Bible or prayer. All we need is the ability to share our own story; the story of what God has done and continues to do in our own life that has transformed us from what we used to be. If we can’t share our faith with others then we will be seeing many more people like Dr. Stone, people that we have forgotten or neglected, wondering who will say a prayer for them, since “I’ve never prayed in my life…Nobody ever taught me how.”

The Rev. Bonnie McCubbin is one half of a clergy couple. She serves as lead pastor of Good Shepherd United Methodist Church in Baltimore, Maryland where she is helping to revitalize an aging urban congregation. A complete “Metho-nerd,” her scholarly work on Cokesbury College, the first Methodist College in the world, has been published in peer-reviewed journals and received international media attention.
Image by: C Jill Reed
Used with permission
https://media.myworshiptimes31.com/wp-content/uploads/sites/3/2014/03/29170614/praying-hands.jpg 387 500 Rev. Bonnie McCubbin https://youngclergywomen.org/wp-content/uploads/sites/3/2017/05/YCWILogo_Vert_Black-300x229.png Rev. Bonnie McCubbin2014-03-04 04:00:442015-08-25 18:35:09The Gravity of Prayer

Should I Stay, or Should I Go?

Ask a Young Clergy Woman: Striving for the Tithe
Scroll to top