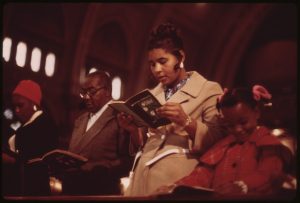 Growing up, church was… interminably slow. Not bad, just slow. Like the waving of a cardboard fan in the hands of a church mother, it was steady and sure, and time just sort of “hung” in church. So there was lots of time to people-watch. The people I especially loved were the old saints, these mahogany/ tan/ebony/cream-with-just-a-hint-of-coffee ladies and gentlemen who occupied the prime seats in the church, who nodded knowingly when the preacher was especially inspired, who sang in the senior choir, and whose hands lifted to the air meant church was going to last an extra five, ten, twenty-five minutes.

I was not a regular (my parents weren’t church goers), but I was a regular visitor to two churches in particular, because my extended family were every-Sunday church folks. Even before I had ever heard of the “communion of saints,” in which we profess our faith each week in my own Episcopal church, I believed in it because I witnessed and experienced it. When we sang the old hymns and spirituals, I felt myself lifted up, beyond. I would imagine Ida B. Wells-Barnett or Frederick Douglass sitting in a church just like that one, singing those very songs. Their pictures, and those of other “Heroes and Heroines of Our Faith and People” were hung along the church’s hallways and on the walls of its fellowship hall, and their solemn, noble faces told stories of faith in Jesus as my people have lived it, of sojourning and thriving in this harsh and wondrous America we call home.

This has been a bloody, bloody summer to be Black in America. In this wearying time, I take with me the saints of my beloved Black church. I take the senior saints in their white church nurse uniforms and immaculately gloved hands. I take the saints in their choir robes and the ushers in their Sunday best, gliding down the aisle. They taught me through their living and witnessing how to live-resist-protest-laugh-love-rebuild-hope in the face of destruction. Though they may have had the most modest employment, though they were often facing the struggle and pain of lives bent and worn through circumstance, oppression, and prejudice, they were people of dignity, of grace, of intelligence, of beauty, of faith, of love. They acted in faith, not fear. They discipled me.

I think of them, of my great-grandmothers and great-grandfathers, of the senior saints and the ushers in those churches, of my own grandparents and parents, and of those saints who are known to me by words and deeds alone. And I remember their triumph even in what looked like defeat.

And I resist. Firm in my faith.

Yejide Peters is the Rector of All Saints' Episcopal Church in Briarcliff Manor, New York. She enjoys writing, long walks, deep conversations with friends, reading voraciously, cooking for people she loves, and browsing home and garden magazines. She is a perennially disappointed fan of the New York Mets.

Living, Breathing Woman Minister: A Review of Karoline Lewis’s She