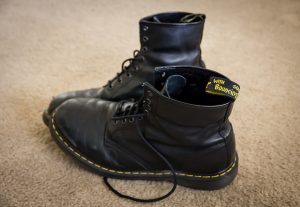 When I was in seminary, and ordination loomed ahead, we, the young soon-to-be-clergy women, often discussed what to wear underneath our cassocks. I guess we were scared. I guess we saw our whole future ahead of us as very respectable members of society, and we were panicking. In any case, we discussed underwear. Black lace? Our even more daring, something red? After all, ordination to the priesthood has a lot to do with the Spirit…

The day came. I can’t remember what I wore underneath all that black. Probably something comfortable. Somehow it didn’t matter once I
was there. That day was full of grace, full of friendship and joy.

So I wore my DrMartens with the cassock. I felt very cool, although in northern Sweden they are about as stupid a choice as is possible; slippery and cold.

I had my hair braided. Long braids down to my waist, in combination with those DrMartens, sunglasses and my beloved cassock earned me the comment, “You’re the coolest priest I’ve ever
seen!” and I was so proud. I had escaped the establishment. I, the ever-so-dutiful eldest daughter, was finally cool.

But was I real?

I preached pretty well from the start. I talked to people, was a good, if somewhat fidgety, listener. I loved, and still love, celebrating Mass. And in the middle of all that, and all the confusion of needing to find a new identity as a priest, I never realized that I didn’t need to be cool. I clung to my coolness, loved being adored by bunches of kids who had never seen a priest younger than 50 before, loved shocking them with the fact that I listened to the same music as they did. I loved playing that part. My underwear was still comfortable, but I played the black lace part perfectly. ‘Cause now I can see that it was a part I played, no more, and no less, real than before.

This identity thing, it’s tricky, huh? My mentor complimented me on adapting so easily, getting in the role. But I was never adapting, I was playing the part. Being a priest was another role, maybe even the much needed comeback from the nerdy eldest daughter. It’s all about finding the scene where you’re coolest, the pond where you can be the biggest fish. In a small congregation in a northern Swedish town, that fish was me. And I was a fish who kept looking over my shoulder, waiting for someone to get the joke.

But somehow, along the way, the fish started liking her new scales. It stopped feeling fake. I stopped basking in the glow of youthful admiration, and started finding my own way as a priest. No longer
needed to prove to anyone that I am a person beneath the cassock. And I no longer feel the need to be cool. Fascinating. God saw beneath, saw my lack of black lace, and gave me a place. I might be more Martha than Mary, in spite of my name, I might wear cotton, and the DrMartens are long gone, but I am a priest.

I always will be, God willing, and I know that the one I’ll see when I look over my shoulder is Jesus, and he’ll wink at me. Because he surely gets the joke. He called me, with or without that lace, heck, he probably even knew from the start all about the fakeness. And he called me. And for that I’ll always thank him. For being a priest, I know by now, is being the real me.

Now: Maria Bergius is a university chaplain in Malmö, also known by some news sources as Sweden's Chicago, and she truly loves her job. The DrMartens are back, because working with students is walking the wilderness with them, and for that you need good shoes.

Then: Maria Bergius Krämer is a priest in a medium-sized parish in Malmö, Sweden, belonging to the Church of Sweden. She was ordained for the diocese of Luleå (in the extreme north of Sweden), but studied theology and attended seminary in Lund in the south.

Commended to God: A Service for Embryos
Scroll to top