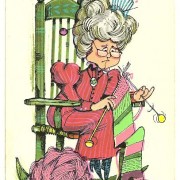 Names in this article have been changed to protect the privacy of parishioners. 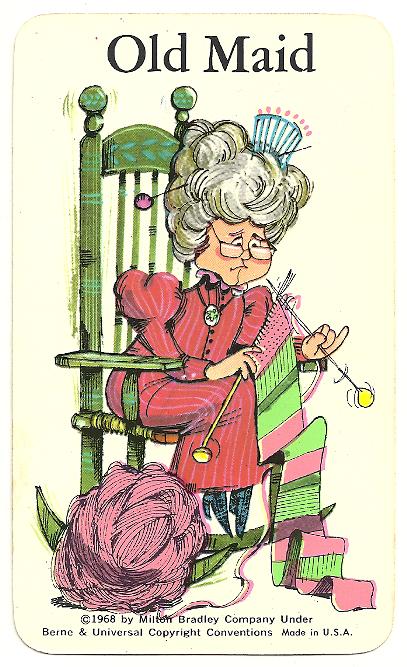 I owe my changed perspective to Mabel, the woman who, during a shared car-ride on a Senior Adult outing, proudly proclaimed that she had been an old maid in her younger years. Even putting aside the incongruity of being an old maid in younger years, Mabel’s statement struck me as odd. I thought back to the illustrated card game my friends and I had played as children. I remembered the dour-faced, homely “old maid” playing card that no one had wanted. Why would anyone be proud to be an old maid?

“I’m married now, but I didn’t meet Bill until my late-thirties, and that was very old to be single back then. I was proud to be single though, and proud to be called an old maid. You have to realize, that was the 1950’s—women couldn’t get jobs the way men could. And even if you got a job, you made only half the wages men made for the same work. But I found a job, and took care of my money, and I was able to live all by myself with no one else’s help. What’s not to be proud of there? They could call me an old maid but what it meant to me was that I could succeed without the help of a husband. That’s an accomplishment.”

I had never thought about singlehood from the perspective that Mabel articulated. The sour, wrinkled woman on the playing cards had early on built up, in my mind, our culture’s view of old maids and singlehood. In that view, to be single in her thirties meant that a woman was probably broken, defective, or unwanted. Even at its very best, singlehood was understood as a life stage to be passed through as quickly as possible. As I grew older, the card game’s understanding of older single women had been deepened through the years as I watched single women around me. I saw that they were frequently quizzed about their personal lives. “Any prospects on the horizon?” an acquaintance would ask, clearly anxious. “I’m sure you’ll be snatched up before you know it,” they’d say, as if the single woman were a product—a lonely, leftover product—on a shelf.

Apart from the culture, I put my own negative spin on singlehood as well. Divorced and living on my own for the first time as an adult, I had a tendency to interpret my single status as a failure; I had failed to cultivate a successful relationship. With every passing year, I grew more critical of myself, blaming singlehood for so many things. The bills were difficult to pay on my minimal salary. My son spent more time in the care of other people because, as a single parent, I had no backup to watch him should work require my attention. I struggled to maintain emotional health as I grappled with the demands of ministry without a partner who could be a sounding board and to whom I could unburden myself after a long day. I blamed singlehood for the hardship of these challenges, and I blamed myself for failing to find and secure a partner.

But Mabel gave me the gift of a new perspective. In Mabel’s statement about the pride she felt to be able to do life on her own, I heard an alternative voice for myself. Yes, some things are more difficult because I am a single, female pastor. But those difficulties are not a sign of my failure; instead, they are a sign of my strength. Furthermore, I began to understand that I had taken for granted the blessing that is my ability to stay single. I am fortunate that I can live a comfortable life without the pressure of having to find a husband for financial reasons; I can make ends meet on my own and there is a great deal of freedom in that knowledge.

Today, I would still bristle if someone called me (or anyone else) an old maid. But Mabel helped me to understand that the status implied by that label is not a sad or regrettable status. Instead, living as a single woman is proof that I possess the maturity and confidence to support myself and run my own life. The additional challenges I face as a single woman may cause me some hardship, but I am a more resilient person because I have prevailed against them. “Old Maid” is not a term I prefer, but if it’s referring to my status as an autonomous woman and someone capable of meeting the challenges of singlehood with success, then I am indeed proud of what it signifies. I am proud to be one of a group of independent, intelligent clergy women who meet the demands of life and ministry solo and who continue to redefine singlehood and challenge cultural stereotypes every day.

I have long since lost or thrown away that set of “Old Maid” playing cards. But I suspect that if I still had them today, the old maid would look different to me now than she did back then. No longer would I see her as a tired, sour-faced woman. Now I think I would understand her to be a wise and determined sister. And I’d be proud of her, for standing firm against the cultural pressure to marry someone (anyone) and for showing the world the beauty of an independent spirit. Bless her, and bless all of you, my fellow single revs, for your remarkable lives and inspiring examples.

Ask a Young Clergy Woman: Grace and Goodbyes Edition Six Weddings, and a Funeral for My Arrogant Discipleship
Scroll to top