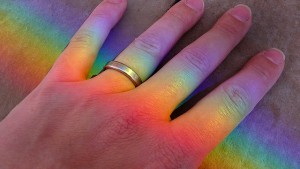 “One midnight hospital vigil, one funeral, one dead mouse under the kitchen sink smelling up the whole church, one brave parishioner kind enough to deal with said mouse, one interview with the paper, one never-ending church directory project concluded, two sermons written…and six weddings. A week in the insane and fabulous life of being a priest.”

That’s what I posted on Facebook to describe the adventure of the last week of June. I could never have imagined at the beginning of the week that I would have some of the most powerful spiritual experiences of my ministry thus far, and learn that I was completely wrong about my own role in them.

It all started on Wednesday afternoon when my parishioner Pam called to tell me the ruling had come striking down the ban on same-sex marriages in Indiana. She and Rachel, her partner of thirty-two years, were headed over to the county courthouse right away to get a marriage license because the ruling would likely be almost immediately appealed, making gay marriage once again illegal. Could I, as their priest, Pam asked, join them at the courthouse and marry them in this narrow window of time in which it would be possible?

My initial thought was, “Wow! This is awesome!” Then the small and selfish part of me asked, “What does this mean for me? Will I face repercussions within the church? In the community?” But then I realized, “My parishioners need me. If I don’t do this, I’ll regret it for the rest of my life. God is giving me this opportunity and I’m not wasting it. Where are my keys?”

And oh, how beautiful it was to see the joy on Rachel’s and Pam’s faces. We stood there in the county courthouse basement, two other parishioners standing there in support as their witnesses, and how could anything have been more right, more true, more full of the Holy Spirit, more an expression of God’s will, than this marriage? I felt so keenly the honor it was to share this moment with these women whom I love so dearly, and to be the vessel through which God’s grace flows to place the sacramental seal on their love.

That moment in and of itself would have made it a day to remember, but then the couple who had gotten their license right before Rachel and Pam introduced themselves as Teresa and Judy and said, “Can you marry us too?” It didn’t even cross my mind to say no. And Rachel and Pam served as their witnesses. Then two more, Melanie and Sandy, came in and said, “Can you help us too?”

The tide of grace just kept building and building, Valerie and Janet, Trent and Jeremy, Betty and Ramona, each serving as witnesses in support of the next couple. And I simply couldn’t believe that God was allowing me to participate in this outpouring of exuberant love and commitment.

No one was wearing a tux or a gown. People had arrived from a day at the office, mowing the lawn, taking the kids swimming. But all of them knew that this was the moment for which they had waited for years and years, and they seized it with joy.

As I stood out on the courthouse lawn, watching these couples fight back tears as they made their vows, I realized I had gotten the lectionary gospel for the upcoming Sunday, Matthew 10:40-42, all wrong. Jesus talks in this passage about welcoming, and we like to think of ourselves as a welcoming church. And so we’re used to using the metaphor of hospitality.

But the metaphor of hospitality is actually problematic. Why? Because it places the church in a position of power. When we use language of hospitality and welcoming people in, we’re implying that we’ve got it all figured out, that we’re on the inside and they’re on the outside. We’re saying that they’re in a place that is lacking and they need to come into our domain, where we’ll show them how they really should be living.

I finally understood that Jesus figured out the problem with the power imbalance in the hospitality metaphor long before I did. I have been reading that Matthew passage for years as, “Listen, guys, make sure you welcome people. Welcome prophets and marginalized folks and kids and give them cups of cold water.” I was placing myself in the position of power, rich with resources and grace that I would generously give away and thereby earn the right to pat myself on the back. That’s not what it says at all.

Jesus is speaking to his disciples and he says, “Whoever welcomes you welcomes me, and whoever welcomes me welcomes the one who sent me.” We, the disciples, are the ones being welcomed, not doing the welcoming ourselves. That puts a whole different slant on the concept of being church. We’re not allowed to sit in our beautiful buildings and our well-established ministries and our comfortable mindsets and wait for people to come to us. Even reaching out to people from our safe and controlled environment is not enough. We don’t get to do the welcoming, because we no longer get to hold on to our power. We have to be welcomed by others.

What a scary thought. That means we have to go outside, outside the church, outside our familiar community, outside ourselves. It turns out that discipleship is a profoundly vulnerable state of mind and way of life. We have to abandon our place of safety and power, thus abandoning our ability to welcome anyone to anything, and we have to trust that strangers will welcome us.

This is exactly what happened to me at the county courthouse that afternoon. I thought I was welcoming people into the church by performing these marriages for these couples, but I was completely wrong. These couples were inviting and welcoming me.

In welcoming me, a total stranger, into one of the most important moments of their lives, they showed courage and trust and vulnerability that I could only hope to emulate in my walk as a disciple. They reached out and invited me into the most intimate space of their relationship, of their hearts, of their shared history, of their family—me, who represented the church, an institution that has done far, far more to harm and persecute and isolate them and their love than it has ever done to support them. It brought tears to my eyes.

“Whoever welcomes a prophet in the name of a prophet will receive a prophet’s reward,” Jesus says. I wasn’t the prophet in this situation, these couples were the prophets. They had been proclaiming the truth of their love for years and years, striking out for the future while the rest of society and the church lagged behind. And they have received a prophet’s reward–persecution in their own time, and in the future, recognition of the truth they have proclaimed all along.

“Whoever gives even a cup of cold water to one of these little ones in the name of a disciple– truly I tell you, none of these will lose their reward,” Jesus says. I wasn’t the one out on that courthouse lawn giving anyone a cup of water. These couples were giving me a cup of cold water, a rich, refreshing drink of grace and discovery. And I was a little one, so small in my understanding of what my role was as a priest and a disciple.

And so I did six weddings that week, and I actually did two funerals, one for a parishioner, and one for my own arrogance and bad theology. I know my pride and arrogance will be resurrected again and again, and I can only give thanks for the grace of God who makes their death holy, God who places me in these situations where I get a glimpse of the light. The salvation I need the most is salvation from my own ego, and God’s light and truth, shining through people like the couples I married that day, cuts through my hollow superiority like a knife. Never have I understood more how necessary death is to resurrection, and never have I been more grateful.

These couples had built lives of love together that weathered everything from the mundane chores of family living to crises of illness and death, when no one else recognized their commitment. Then they welcomed me and they welcomed the church into that sacred space and asked for a blessing of it. I was invited by them onto holy ground, brought to a place of having to confront my own self-congratulatory posturing about what I was doing, and remade in my understanding of what it means to be a disciple of Jesus Christ.

Who exactly blessed whom out on that county courthouse lawn?

Perhaps we blessed each other.

Perhaps that is what Jesus meant all along.

The Rev. Whitney Rice attended Yale Divinity School and is the pastor of the Shared Ministry of St. Luke’s Episcopal Church in Shelbyville, Indiana and St. Thomas Episcopal Church in Franklin, Indiana. She is equally drawn by the darkness and the humor of spiritual life. See more of her work at www.roofcrashersandhemgrabbers.com.

On Healing and Time
Scroll to top