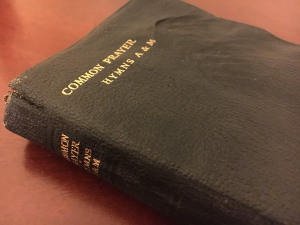 Hidden away on our bookshelves is a little black book dating from the 1930s. When I hold it, my hand feels the imprints of my grandfather’s fingers on the cover. My thumb rests effortlessly at the end of the title: “Common Prayer – Hymns A & M.” Eight years ago, I brought this book with me from England to America to remind me of my grandparents. It never occurred to me that it would be a way of connecting with a congregation here, but that is exactly what has happened at my new parish.

Anglicans around the world would understand the shorthand in that title. “Common Prayer” refers to the 1662 revision of The Book of Common Prayer of the Church of England, while “A & M” means “Ancient and Modern.” The Book of Common Prayer was an attempt by Archbishop Thomas Cranmer to bring unity to the English church following the Reformation by mandating one form of worship for everyone. Hymns Ancient and Modern was an attempt to consolidate the most popular Anglican hymns of the late 1800s into a single volume. It was this little black book that British missionaries took with them as they went out around the world to spread the good news – and to reinforce the power structures of the British Empire.

I am keenly aware that what joins me as a white priest to my mainly black congregation is the colonial past, which includes the shared heritage of The Book of Common Prayer and the hymnal that went with it. My parish is around forty percent West African and thirty percent Caribbean, while the remaining thirty percent is made up of North Americans (both white and African-American) with a splattering of Europeans. There is also an emerging Central American congregation that worships separately in Spanish, led by another priest.

Ministering into this tension that is the shared heritage of the Anglican Communion means being aware of the privileges that I have as the priest and as a white person, and at the same time acknowledging the shared experience of being an immigrant. Almost everyone in the English-speaking congregation comes from a country that is a former British colony or still belongs to the British Commonwealth. A number of the Caribbean parishioners have told me that they remember being sent “the latest young priest from England” when they were growing up, and so there is something familiar about having a young, white English person pastoring their congregation. Although they have shared this a positive memory, I cannot ignore that our present reality together comes with a colonial power dynamic based in both culture and race.

Almost all of the members were also raised as Anglicans. Like me, they came to the Episcopal Church because it is part of the Anglican Communion. And yet, the Episcopal Church is not quite home for us. Having separated from the Church of England more than a hundred years prior to any of the other colonies, the American Episcopal Church is different in many ways from the churches they and I grew up in. This means that there are times when I find myself sharing more in common culturally with the black African and Caribbean members of the congregation than the white North American members.

The place where this is felt most strongly is in the hymns. The shared cultural knowledge of being able to identify a hymn by its number in A & M brings together people from the Caribbean, West Africa, and England. We can then enjoy discussing which tune we sing to each hymn. Most editions of A & M still only print the words to the hymns without any music, and therefore there can be a lot of regional variation in which tunes go to which hymns. In the Episcopal Church, on the other hand, The Hymnal 1982 has for the most part one recommended tune for each hymn. Everyone is used to singing it with the music in front of them, so that tune becomes very attached to the text.

In my first several months with the congregation, I noticed a common occurrence that happened nearly every week. After singing a familiar hymn text to a tune I didn’t know, some of the West African members and I would have the same reaction: “Wrong tune!” Singing can bring us together as a community. The words we say in worship do not unite us in the same way as the bonds that are formed when communities sing songs to God. When we sing a song from our childhood, our souls remember home. When an unfamiliar tune is played, it is a reminder that we are not home.

During Easter season this year, I worked with some of the West African members to choose hymn tunes that are familiar to them, instead of those in the Episcopal hymnal. Many of the white Americans in the congregation struggled with the disorientation of singing to an alternative tune and only having the words in front of them. I needed to reassure them that it was okay to feel the tension of not singing a hymn to the tune they know. I also gently pointed out to them that this disorientation is what a majority of the congregation feels several times each month. As we continue in our shared ministry, I see it as part of my role to help all of us deepen the bonds of affection that join us to one another by growing to better understand both the heritage we share and the cultures that make us different.

A few months ago, I went to do a pastoral visit with a ninety-year-old lady from West Africa who is almost blind. I held her little black Book of Common Prayer and Hymns A & M, and she drew on her memory as we sang hymn number 133: “Come ye faithful raise the strain.” In that moment, many cultures, times, and countries came together. I felt the call to lovingly hold onto the past, be fully aware of the present, and allow the future to unfold.

Sarah Lamming has been Priest-in-Charge of St. Mary Magdalene Episcopal Church in Silver Spring, Maryland, since October 2016. She lives in Annapolis, Maryland, with her wife, who is also a priest.