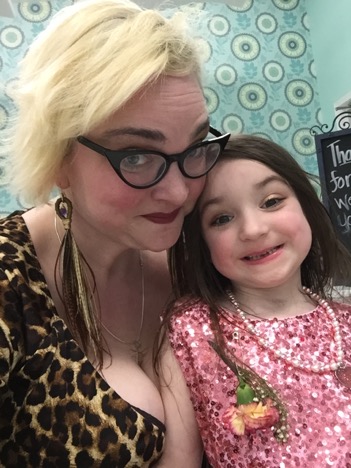 My congregation is an important part of the community, and when I was called here, it was a clear expectation that I become involved in this community. I’m on the library board. Everybody at the cafe knows my name. Options for friends are more limited, but that has also been a blessing for me. I make connections that I might not necessarily seek out. Take, for example, my friend Jason.

Jason is the dad of one of my daughter’s former preschool friends. He owns a property management company, and does everything from snow plowing to landscaping to building incredible gardens. He’s a pillar of our community, and he’s also a kind and thoughtful man. He once seriously considered seminary, and we often talk theology (though I’ve yet to convince him to come to church). I might not have been surprised to receive a call from Jason, but his invitation was definitely unexpected.

Jason called to invite me to attend the Daddy/Daughter Dance at the school, and to join in a larger group of dads and daughters for a fancy dinner before the dance. Honestly, I’ve got major issues with the whole concept for many reasons—many kids don’t have a daddy, many kids live with grandparents or foster parents, and, frankly, the whole heteronormative daddy dating daughter thing seems a bit sketchy. But, with many other places where I push the envelope, this hasn’t been a hill on which I’m ready to die, so I had resigned myself to ignoring the event for the next few years.

Jason’s invitation was sincere and warm. He and his daughter, now 11, had cherished this tradition since she was my daughter’s age. My daughter was near me while we were talking on the phone, and she asked me what it was about. I told her there was going to be a daddy daughter dance. Her face fell. She said, “I don’t have a daddy.” (That’s the first time she’s ever expressed distress about this fact.) I said, “No, but you do have a Mama, and I will take you to the dance.” She responded with joy. I knew we needed to go.

I bought her a new, fancy dress. We both put on make-up, and joined all the dads for dinner at one of our nicer local restaurants before the dance. She played with the other (older) girls, and enjoyed the special attention she received. I got to know the dads sitting near me. We talked of poverty and local issues, of literacy, and family dynamics. They didn’t blink an eye when they found out I was a minister. We joked and laughed, and they never once questioned why I was there.

We went to the dance, where the girls had a blast dancing like crazy. After the dance, we went to the local ice cream parlor for a sweet end to the evening. The girls enjoyed their ice cream while I was again stuck trying to make small talk again with more dads. Then, all of a sudden, our conversation turned towards hell, and universal salvation, and a deep discussion of what each of them had been taught about God as children. I was able to introduce them, gently, to a more progressive view of Christianity than they were perhaps raised in, and talk to them about my theology of salvation. In an ice cream parlor. After a daddy daughter dance. While our daughters laughed and enjoyed their dessert.

They saw me, a high femme lesbian, in a low-cut leopard print dress, a single mama, and a minister. And they respected me. They listened to what I had to say about God. About church. They were vulnerable with me. They heard me listen to them about how they had been hurt or disillusioned by the church in their lives. This was not a pastoral experience I would have ever expected or anticipated.

To be honest, I don’t seek out the company of straight white men. Patriarchy is an evil. I truly believe that. And I believe it hurts men and boys as much as it hurts girls and women, even if it’s in different ways. I think our daddy daughter dance concept is problematic. And yet, I saw so many dads and male relatives and friends supporting their daughters and girls to have a really fun dance night together… And it was lovely.

I believe that our Call is to bring about the Kingdom of God on earth. But how do we do that? I guess for me, it means leading by example: Being a single mama strutting into a daddy daughter dance in a fancy dress with my beautiful girl. Listening to people who believe differently with an open mind. Putting on an apron and serving soup for those who are hungry or lonely at our free supper. And just being visible and available for anyone who needs to hear that God loves them. Many of the folks I encounter will probably never come to church, but if their interaction with me opens up an understanding of God’s love, it’s worth it.

I also receive reminders of God’s love, in the acceptance of dads who are willing to show up for me and my daughter. She has great men in her life who will support her, and support me. They will fill in when I need some help, or when I need a male perspective. They will stand up for me if I need support. This is the beauty of being in a small town: we are loyal and connected to each other. We know that the things that connect us are much stronger than the things that divide us.

I see God working in my little town, in snow plowers and car salesmen, farmers and truck drivers. Men who might seem like they would never be friends with a single mama lesbian pastor. But, our humanity, our love for our daughters, and our understanding that everyone has their own path to walk, connects us. We all grow because of that connection.

Cordelia Strandskov is the minister of Second Congregational Church of Norway, Maine, United Church of Christ. She is a single mama by choice to the most amazing six-year-old PK (pastor's kid), who has a very busy social calendar.

Call to Action: A Review of Women Rise Up: Sacred Stories of Resistance for...

In the words of Beyoncé
Scroll to top