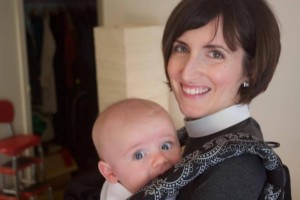 The author and her son before his first day of day care.

I love being a parent.

I love not having to worry about whether I am going over my half-time or three-quarter time limit. I love getting to throw myself wholeheartedly into my church. Frankly, I love getting to use the restroom by myself.

For my family, both parents working in churches full time is what has felt right to us. Both my husband and I had working mothers and neither of us felt called to be at home. We are keenly aware though, that this choice was only a viable choice to us because we have lived in two places where excellent day care centers were available for our son.

I am weirdly passionate about day care centers. After innumerable Safe Church trainings, I was far too paranoid to employ a nanny or have my child in a home-based childcare. (Though most of these are perfectly safe, I know!) For me, a well-reviewed day care center, where multiple adults supervised my son and gave accountability to each other, were the key to my peace of mind.

In a recent appearance on SNL, Tina Fey and Amy Poehler, made a video titled “Dope Squad” in which they honored the women in their life—including their (actual) nannies. I relate to their passion for the women who help make their lives possible. I have the same love and respect for the women who have made ministry possible for me: Charlie’s teachers.

Ms. Betsy and Ms. Debi were Charlie’s teachers when he was an infant. We enjoyed the luxury of a subsidized seminary day care—a beautiful Reggio facility with an open floor plan. Ms. Debi was a seemingly unending source of affection and energy who nicknamed my son “Roly-Poly,” since he was a rather. . .rotund. . .infant who moved around by rolling around until he has a year old. Ms. Betsy was the sterner of the pair, an expert baby minder, who solemnly told me when it was time to move up a size in diapers or when Charlie was ready to move to solid foods. (He told her by stealing the food off another child’s plate.) Betsy was like a living parenting guide, and she was ready for any question I had.

When Charlie was one-and-a-half, we moved to a small town in Virginia. The one day care on my 30 mile commute is a small child development center in the basement of a Presbyterian church. This church began this day care as a ministry to the community decades ago, and it still serves a huge geographical area. Charlie’s first teacher here was Ms. Kathy, a young woman with a dry sense of humor who helped my son learn to share, and express his feelings with words, and stand up for himself. She also gave him the occasional mohawk and respected his wishes when he did not want one.

Charlie’s next teacher, when he was three, was the director of the facility. Ms. Donna is a Mennonite who, years after raising her own children, is now raising a second set of children through foster care. It was our interview with her that cemented our interest in the place.  She radiates love. Ms. Donna follows the children’s interests. So, when our son and his friends were interested in Volcanoes for six solid weeks, Ms. Donna built volcanoes with them, watched volcano videos, read volcano books, did science experiments to see what household liquids would make the biggest volcano explosion. (That old Mentos in a Coke bottle trick is still impressive, by the way.)

Our son’s current, and final, day care teacher is Ms. Tina. Ms. Tina quickly went from an assistant teacher to a lead teacher. She is creative and loving and patient. She has taught my son to begin recognizing words, building a foundation for reading that will change his life.

Ms. Yvonne, the former director of the center, cooks breakfast and lunch for my son every day. She also lets me sneak a cinnamon roll on the rare mornings she makes them.

These women have partnered with my husband and me to raise our son. They have been our village, and I already grieve losing their community when my son moves on to Kindergarten next year. Day care workers like them—who get paid peanuts, by the way—are supporting the working lives of millions of families around our country. They have truly enabled my ministry, and I could not be more grateful.

Sarah Kinney Gaventa is the associate rector at St. Paul’s Episcopal Church in Ivy, Virginia.  She hopes her son is not too scarred by being a double preacher’s kid.

My Friend, the Mortician
Scroll to top