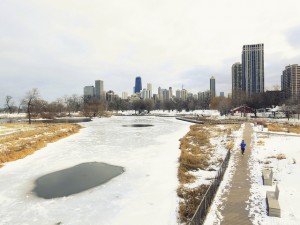 The soft snow swooshed up around my feet, giving way to a crunch of crusty ice just beneath the surface. To my right, the lake was a frozen city of jagged mini-skyscrapers, with shifting plate-tectonics of ice hinting at the waves trapped underneath. The sun was out, the air crisp and the gray horizon was a sharp line. How great to get out! Just a few days before, during the drunken meanderings of one so-called polar vortex, arctic air landed with a vengeance on the Midwest. The air became downright dangerous, and we all retreated, buying eggs and skipping work and catching up on our favorite Netflix series.

Watching the coverage of the vortex warm and safe on my couch, I saw it. The lake. I leaned forward. I didn’t recognize my usual running partner. It looked like a sauna or hot springs at some spa. The air was so cold, Mr. Weatherman reported, the lake was steaming.

Now, I was not brave/stupid enough to venture outside to confirm this unusual phenomenon. Pictures sufficed (God bless technology). At first, the steam rising serene off the silver water was a soothing image. Then, with no further explanation, the news went to commercial. I sat up on the couch, indignant. I couldn’t grasp what was happening. Yes, it was “steaming” said the know-it-all-newscaster–but there’s no heat! (Is not even the boiling point of H2O sacred anymore?) My moment of existential confusion passed, I reached over to my laptop, smirking. The results list to my query of cold-induced steam would surely illumine the matter. Eventually, a long and overly bland Wikipedia entry explained what vapor/steam was (duh) but left it to me and my brain to put the details together. I gave up.

A few days later, the weather warmed as did my attitude towards it, and I eventually got it to click. Though it be painfully obvious to everyone else what was going on, here it is in a way that made sense to my brain: cold causes things to contract, condensing the air and creating less pressure. The pressure above the water decreased so much, the water molecules essentially were able to break apart from each other as water and go into the atmosphere as vapor. Heat applied to water usually does this in the form of boiling or evaporation. It’s the same effect as when you breath out moist air from your lungs and can see it. Which gets you a “steam devil.” (So apparently, hell can freeze over and it is still hell.)

Okay, perhaps my confusion and indignation were dramatic. Watching the Chicago River steam was downright freaky. But it was also cool. Even the newscasters seem to talk about it with a certain hush, a pause in the chaos of canceled flights and power outages. It was entrancing—yet it was also warped. The vortex created a caricature of the always-familiar lake. I kept thinking how those H2O molecules were in a hot—or in this case frigid—mess. Gas, liquid, frozen? Hot or cold? What?! Just be something recognizable, please!

Well, I can relate.

Running along the lakefront, thoughts of post-graduation plans from Divinity School chased me. I get all worked up about my status as an activist, student, scholar, minister, Christian. The nice thing about collars and church seasons and denominational labels is that our role is, practically speaking, clear. Now, of course that is changing, and without good reasons. We’re told to embrace bi-vocationality, our multiple selves and roles, and live boundaried and balanced (yet holistic!) lives.

As my running buddy Lake Michigan has recently reminded me, sometimes transition, no matter how predictable or explainable or Google-able, it is just plain freaky. After all, I only have one wild and precious life. People want to know: what will you do with it? I have to start becoming what I’ve been trained to become, to live in and out of my vocation as a minister. Going from student to clergy will be a jump—or a fall. How will the world see me? Will the world look at me kindly, and see a beautiful, intriguing woman capable of many forms, both soft and sharp? Will it even understand me? Or will it gaze upon me with confused fascination? Can they understand, or at least accept, the kind of woman pastor I seek to embody, even if I don’t know what that is?

My fear of changing states from masters student to minister is not so much the deep plunge into the “real world.” It is more the unexpected shifts of context, of climate. Will certain situations force me to be, do or say that which I’d rather not? Almost certainly. Will the pressure and powers-that-be conform me into something that is recognizable to them? Or worse, will my unorthodox ways illicit enough backlash that I voluntarily retreat into a monolithic version of myself? Then I will be far more normal, understandable, and safe. And I will be a less effective, less honest minister.

My pace and breath slackened as I veered right , my stride following my gaze to the now normal-looking lake. Whoosh!! My chest and chin landed in a pillow of dry snow. Surprised, I laughed at just how pleasant the fall was, and just how unpleasant a fall on the lake would be. Perfectly understandable and yet amazing, these two substances were at their core, the same.

School supported me to be scholar and a pastor, intellectual and artistic, angry and courageous. I want to be an integrated person, yet capable of many distinct ways of being. It is that reversal of environment, of self-in-environment, that makes my future of ministry worth the unexpected falls.

I stood up and brushed off, then kept running through the cold, thoughts of Spring on my mind.

Erika Dornfeld is a 3rd-year Masters of Divinity student at the University of Chicago of Divinity School. Upon graduation, she will begin the ordination process with the Evangelical Lutheran Church in America in the Chicago Metro Synod. She will also begin to read for fun.