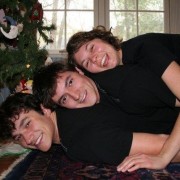 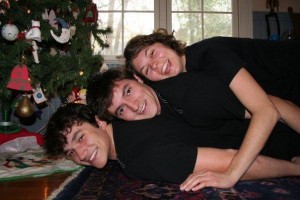 My brothers and I were raised in a medium-sized Presbyterian congregation in a small southern city. We went to Sunday school, worship, and the Wednesday night program. Our parents were at various times youth advisors, ruling elders, worship leaders, and members of a supper club. We liked our pastor; we liked our church. But by college, none of us felt comfortable saying the Apostles’ Creed. Today, after a rather unusual conversion experience in college, I am a Presbyterian minister. My younger brother lives and works in India with his wife, who was also raised Presbyterian. He is both skeptic and seeker, and is not currently affiliated with any faith community. My youngest brother is agnostic at best. The three of us remain close friends, however, and religion is not a taboo subject. These poems explore our various experiences of being “nones,” a growing category of young adults in America today who identify with no faith tradition. The first poem is a meditation on the term itself—as viewed from each of our perspectives. The second poem takes on the voice of my youngest brother, the true none. The third adopts the perspective of the middle child, and the final one tells my own story. My challenge as a poet is also my challenge as a Christian and as a sister—to really listen to the other without moving too quickly to judgment.

The number of Americans who do not identify with any religion continues to grow at a rapid pace. One-fifth of the US public—and a third of adults under 30—are religiously unaffiliated today, the highest percentages ever in Pew Research Center polling. —“‘Nones’ on the Rise” (2012)
I like it.
It has a nice ring.
Faith? None.
Religion? None.
God? None.
Obligations? None.
Objections? None.

The difference between
a “none” and one
who believes is so small really.
A penned arc,
an answered prayer
a slight tear in the tightly woven
fabric of assumption and experience.

There’s a lot about church I like, an open-minded one at least.
Community outside work, volunteering, discussions of
meaning, ethics. I see the value of that.
The problem is worship. If you don’t believe in God,
the whole thing is pretty awkward, if not bizarre.
I don’t mind being a spectator; why
should church be any different from the rest of my life?
But I can tell they think I am one of them, a Christian, a believer,
a setter-aside of the obvious absurdity of absolute truth claims in a pluralistic world.
I want to represent things as they actually are.
It’s like why do people say I love you?
It means something different to everyone, so what does it even mean?
They should say instead, I feel great when you’re happy.
Or, I want to protect you. Or, I’m hanging up now. Good night.

Everyone wants a story,
but the slide into something
less than faith but not quite
atheist isn’t terribly
climactic. It’s having
more questions than
answers and being in the middle
of ten thousand things and moving
every couple of years and loving
every idea and sensation and riding
an auto rickshaw to work and seeing
the Muslims on their knees and the Sikhs
feed their fifty thousand daily and thinking
about the people in churches
like moths at a front porch light,
but still kind of hoping
that something
bigger than our monkey brains
will reveal itself.

IV. I too was a none

I was raised Presbyterian
in a sea of Southern Baptists,
went to church camp, learned the creed, knew myself
loved by God and Sunday school teachers.
I liked that every sermon ended with a question;
it gave me permission to start asking,
as I wondered whether my parents really believed.
By college, I loved the preacher’s son but not the Lord—
Jesus just a character in one holy book among many.
Myself just another “none” among the too busy—
Friday and Saturday nights our mad worship,
sleeping in, our half-Sabbaths of recovery.
Because overachievers may be mistaken
for believers and young Presbyterians
were in short supply, I found myself
nearly nineteen, a “youth advisory delegate”
at the Presbyterian version of Congress in Long Beach,
eyes glazing over, backside numb from
never-ending meetings, hearing speech after speech—was this
a leadership opportunity or a desperate recruiting attempt
by the league’s worst team? Jesus was the last
person I expected to see—assuming him to be
bound to the errant page, icon of a different age,
having been passed on the right and left
by football, science, and the American Dream.
Meanwhile, the protesters gathered
decently and in order
a circle of white shirts and rainbow crosses
outside the sanctuary doors—
Soul Force ready and willing to fight injustice
with a few hundred handshakes and a smile.
Fred Phelps and his Westboro Baptist soldiers raged nearby,
signs proclaiming the good news
that God hates—well, you know, and
it occurred to me then
where God most certainly was not,
but before I could follow that thought
to its logical conclusion I was shaking
hands with a smiling man,
whose innocuous spiel I could barely hear,
as a torrent of emotion rushed over me—
centuries of pain caused by fear and loathing in La Iglesia
(“Perverts,” “Keep Away From Our Children,” “Abomination,” “SINNER”)
and when I came up for air, a voice in my head saying,
“Whatever you do unto the least of these, you do unto me.”
And there he was, the Jesus-I-Didn’t-Believe-In in my face,
saying, “Here I am, outside the Church,
what are you going to do about it?”
And that was only the beginning
of the Acts 10 reenactment—first the weird visitation
to declare the unclean clean,
then the partnered gay pastor
knocking on the door of my life,
then the Spirit pouncing again and again
when I least expected it, and sometimes
even when I demanded it—putting the Lord my God to the test
with all the hubris of a spoiled child.
Maybe the only cure for a None
is a healthy dose of the One,
who is
(unfortunately for America)
(thank God)
not for sale.

Emily Rose Proctor is a poet and pastor in Jacksonville, Florida, where she serves as the director of young adult and global outreach ministries at Riverside Presbyterian Church. An earlier version of this piece was published in the May 2014 edition of Presbyterians Today Magazine under the title “Rooted in Faith, Growing Apart.”

On Healing and Time

Pilgrimage with My Mother
Scroll to top