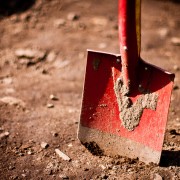 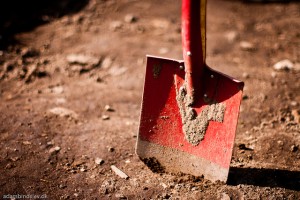 Marrett and I had been trying for this new baby since May, a mere eight months into our marriage (the second for both of us). We have four children between us, his two girls aged 14 and 11, and a boy for each of us, his newly 6 and mine 5-and-a-half. Though the six of us together have blended into a big happy family, Marrett and I want one more, a baby that will be ours together. And since we are 37 and 42, we were relieved to be pregnant after two months of trying.

As the bleeding darkened and increased throughout that interminable day, it became clear that this hoped-for little life was not going to be. By the time the doctor confirmed it Monday morning, the miscarriage was in full swing, and Marrett was already grieving.

I felt nothing but stunned and helpless, not only about my body’s decision but also about the work schedule I was facing. It was the week of Vacation Bible School and I was acting as VBS director, in addition to the fact that I was the only pastor at the church that week, as my colleague was on sabbatical.

I could have told people I was sick and taken time to rest and to feel, but the idea of telling anyone anything or securing coverage for all the details of that week was simply too much. It would be easier to just get through it, and to take the days I had already planned to be away afterward. It was a long week, as VBS week always is, but those hours I spent with the kids were well worth it, as they always are.

Marrett served as one of the VBS teachers and his girls helped, while the boys (mine and his) attended. By Friday morning, the bleeding had nearly stopped, and I was ready to write and pray and process. After a couple bouts of sobbing, pages of journaling, and enough sleep, I felt better. I felt so much better, in fact, that I thought I was getting off easy with this trauma.

The following Monday, eight days after the miscarriage began, I realized it wasn’t over. It started with one of those innocent questions all young clergy women get asked about our reproductive plans. The council president pulled me aside as our weekly meeting ended to whisper, “Is it too early for congratulations?” It honestly took me a minute to understand what she meant, and I stammered, “What? No! I’m not pregnant,” while inwardly panicking.

I had spoken with her months earlier, when discussing the church’s maternity leave policy, about needing to use it myself as Marrett and I were planning to try for a baby. It turned out that other women from church had also been speculating about the state of my womb the previous morning because I was wearing a loose-fitting shift dress. Of course, they had no idea that even as they spoke, I was shedding the remains of the possibility that was the object of their chatter.

For the rest of the week that followed, the tiniest irritation had me fuming, unbidden tears sprang to my eyes, and I found all of social media, which I normally love, maddening.

By today, two weeks into this miscarriage journey, I was keenly aware that I needed to slow down and emotionally dig deeper before I could return to health. So I put my son, Ollie, to bed early and sat down with a book I’ve been winding my way through, an assignment for a continuing education group.

The book is Christine Paintner’s Soul of a Pilgrim, and each chapter contains opportunities for reflection. The one that met me when I opened the book tonight was Lectio Divina on Genesis 3:23-24. “So the Lord God banished him from the Garden of Eden to work the ground from which he had been taken. After he drove the man out, he placed on the east side of the Garden of Eden cherubim and a flaming sword flashing back and forth to guard the way to the tree of life.” Paintner instructed me to find a word or phrase that shimmered, something begging for my attention, and the phrase came to me immediately. “To till the ground from which he was taken….”

The words quickly became personal as I spoke them silently to myself: to till the ground from which I was taken. I felt the unfairness of the “being taken” without choice, both originally from the ground when the Lord scooped up the dust and breathed it into being, and then from the garden, the only home they had ever known. I felt Adam and Eve’s loss as I felt my own, the loss of a newly created hope they’d barely had time to understand. I groaned inwardly at the irony of having to till the very ground from which you’d been created. And yet, what choice did they have? Just as they kept the garden God had given them in joy, they would now till the earth given them in God’s grief.

And what choice do I have? This piece of ground, my life, sprouting with both joy and grief, is given by God for the tilling, for the keeping, for the production of fruit and the strengthening of faith. Surely I could refuse to till it, but I know what would happen then. Like the garden plot left us by the previous owners of our new house, if not tilled deeply and thoroughly, this ground will spring up with crabgrass so dense it chokes out the tender, life-giving things we want to grow. In the hot sun, it will crack and the driving rain will run in those cracks until they erode in to chasms.

It is tempting to turn just a few pieces of this tragedy over in my heart, and then rake the mess smooth as though it was never there. But I’ve done that before, and the experience of others warns me off that path, as well. No, the only way through, with this miscarriage, or any loss in life, is to dig in. We must till this piece of earth until all the hidden rocks have turned up, all the hard clods break apart, and all the manure is thoroughly mixed. There is no other way to prepare for the springing new life that is promised.

So today, once again, I sink my fingers into the dirty mess that is all around me, into the dark depths of this grounding loss, and I commit to the tilling. I will turn emotional handful after handful, watering with my own tears, trusting that the Ground from which I was created will make my work fruitful.

Rev. Collette Broady Grund lives in Mankato, Minnesota with her husband, their four children, and two dogs. She serves Bethlehem Lutheran Church (ELCA), and blogs at The Broady Bunch.

The Day Both Everything and Nothing Changed

Speaking from Experience
Scroll to top