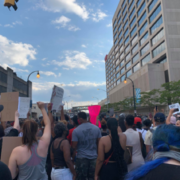 Many clergy are participating in Black Lives Matter protests. Here's the story of one white ally in Atlanta.

It was muggy and warm and not really comfortable in Atlanta that day. A minister friend and I put on our clergy collars, parked at the local church, and walked to the George Floyd protest. The national guard had blocked pedestrian walkways, forcing us to walk an additional mile just to join the others that had gathered. Armed soldiers were everywhere. Police were in full riot gear. It seemed as if the city “too busy to hate” was a warzone. 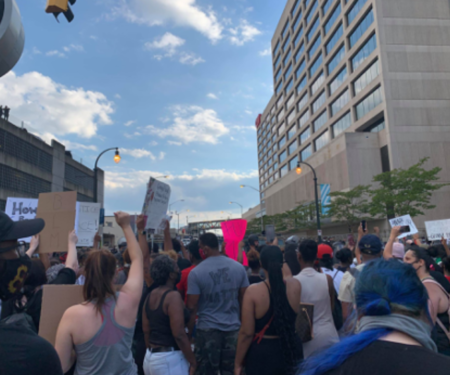 Protesters in Atlanta, GA gather in support of the Movement for Black Lives.

I did not fully know what I was getting into, but I was somewhat prepared. My friend and I had discussed what we were bringing, what we felt comfortable doing, and how we were going to do it. We stayed in contact with each other throughout and made sure we each knew what the other would and would not do.

But I had never been at a potentially violent protest before. I had participated in the Women’s March in Washington, D.C., sure. I had been threatened with dismissal as a student (a couple of times, actually). I had even worked to get a local Confederate monument removed. I have never been one to shy away from challenging authority. But this was new.

My friend and I had been in a group of hot sweaty people who were yelling at police for only a few minutes when someone shouted “Allies to the front!” My fellow protest chaplain and I looked at each other, shrugged, and moved to the front of the line. A primary role for a protest chaplain is de-escalation. When allies are called to the front, the goal is to shield our siblings of color with our bodies. And a small white clergywoman in a collared shirt standing in front of a police line in full riot gear is a visceral image. We stood there at the front while our Black brothers and sisters chanted and talked and stood vigilant. Organizers handed out cold water and hand sanitizer and checked-in with people.

The crowd eventually moved a block down. Like water, these protests often move to places of least resistance. We found it difficult to gauge where we were needed. We took a break, ate a snack bar, drank some water, and stood in the middle of two groups a block from each other. These two groups started to converge a bit, and they were getting amped up. Water bottles started to fly at the police line. Fireworks were going off nearby. Curfew was still 45 minutes away. We moved closer to the police line and began to regroup when the tear gas canisters went off.

I was not ready. I had read up on it. I had learned what it would feel like. I thought I knew what to expect. But let me tell you – I had no idea. One of the canisters fell a yard from where we were standing, and despite my mask I was quickly overwhelmed. I couldn’t breathe and moments later I couldn’t see. I panicked because I was blind and felt like I was suffocating. My friend was prepared with ski goggles and didn’t get hit as bad as I did. I grabbed onto her backpack and she led me out.

Then I tripped. I let go. I was on the pavement and I could not get up on my own. An angel picked me up. “Keep moving pastor, you gotta keep moving, do not stop, you can do it! LET’S GO LET’S GO LET’S GO!” After 100 feet of being hustled by some unknown woman, I was on the sidewalk next to my friend who poured baking soda water over my head (prepared, remember). Within a few seconds I could see again, but my lungs hurt and my eyes stung.

People were in anguish. Lament was palpable. Screams and anger and frustration abounded. It was chaos. Rage ran through the crowd. It was awful. But hope abounded too. People were rushing around with water bottles and milk and dousing one another’s faces – it was like baptism – washing away the fire and dirt and pain. We were made new in those chaotic moments. Those people were in the midst of holy work. I witnessed care and love between strangers bound by a common purpose.

I looked around for the woman who picked me up – but she was gone. I never learned her name. But it dawned on me, in that very real moment of panic… she had called me pastor! She had seen my collar; she had seen me at the front and she knew who I was. Our presence was noticed. We were needed.

Several women, while sobbing and praying, moved forward in the street again. A group of them formed not 15 feet from the police line. They had just been gassed and they were on their knees and praying for mercy. As a white person, I had the privilege of getting up and just going home. I had already been gassed once. This violence is what black, indigenous, and people of color face every day. My privilege told me I could go home, but my faith would not let me go that easily. I got off my ass and with my friend walked to the front again. This time, we stood behind them while they were on their knees sobbing to God. We stood with them and we prayed.

One man, obviously homeless, kept going in front of us and getting a bit too close to the police line. My fellow protest chaplain, who is incredibly talented at seeing when de-escalation is necessary, would go up and stand next to him, then take his hand and slowly bring him back. After seeing her example, I did it once too. I’m in awe of her talent. We remained with this smaller group. I don’t know how long we stayed there, but tear gas was shot off again a block away, and the wind brought it to our area. It was not as strong this time, but after the first time it was too much, and the crowd began to disperse.

I would have held the line if they had stayed. But my job is to support those who are present, so, as the crowd began to slowly scatter, so did we. We took our new unhoused friend to a safer spot in the downtown area, found our cars, and we went home.

Chaplaincy at protests is an odd line of work but a necessary one. Our presence dissipates agitation of officers while gives protesters freedom to pray, be prayed for, or to see us as a source of help. Clergy at these events demonstrate the presence of God-fearing people who support their cause. Being white and clergy provides a visceral image that demonstrators do not stand alone without allies.

I’m glad I went. I will go again, and next time I’ll bring ski goggles.

Hannah Hill is the Director of Partnerships at PadSplit, a tech startup focused on addressing the affordable housing crisis. Previously, she worked for several years in the prison system running her own non-profit. Hannah has been active in efforts to remove the Confederate Monument in Decatur, GA. Ordained by Alliance Baptists, she officiates weddings and funerals for those who long for spiritual presence but have no religious affiliation. 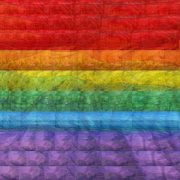 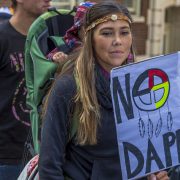 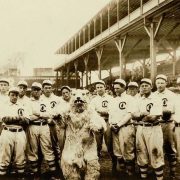 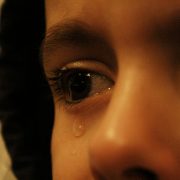 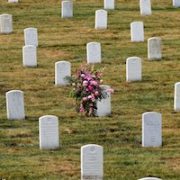 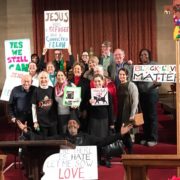 We Are Not All Having the Same Experience: Clergywomen with Children and Co...

The Mask
Scroll to top