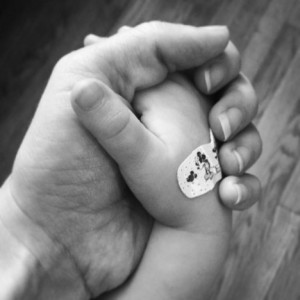 holding both the visible and invisible wounds

The words the nurse said that day return again and again to my thoughts: “If the ulcers that are on the inside of her body were on the outside, you’d have to wonder how she’s been making it through the day.” It was a Wednesday, the day of my then eleven-year-old’s diagnosis with Crohn’s disease. The MRI left no room for doubt; her digestive tract was heavily damaged. We would need to change her diet, monitor her inflammatory markers through blood draws, and begin a regimen of steroids and other medicines in an effort to put her Crohn’s into remission.

Hers was our first appointment of the day. As soon as she had changed out of her hospital gown and back into regular clothes, we descended four floors on a hospital elevator for her younger sister’s appointment—a diagnostic test to measure the reflux in her kidneys. The test would determine how successful her latest eleven-hour surgery had been—the third major surgery in the fewer than two years since she’d been born.

Most people who meet my girls assume they are healthy, normal (whatever that means) kids. But the appearance of health can be deceiving. My oldest daughter has been denied the use of the bathroom when she has had an emergent Crohn’s-related need while at school, even though her disease has been documented and communicated to the staff. To look at her, one would not surmise that she has special health needs. As a result, her needs are sometimes dismissed or minimized. Similarly, even people who know about my youngest daughter’s kidney anatomy have called her “lazy” about potty training (it is not clear whether she has complete bladder control due to her anatomical anomalies) and “spoiled” because she continues to breastfeed. (Her urologist encourages long-term breastfeeding as a way to boost my daughter’s otherwise compromised immune system.)

When others cannot see the hurts that are on the inside, it’s easy for them to invalidate the pain: the sleepless nights, the seemingly endless doctor visits, the invasive medical tests, the worry. As a mother who wishes I could take all the hurt away, I’m often livid at the flippant responses of those who dismiss the very real pain my daughters experience—and the very real pain their brother and father and I experience as we try to support our girls and determine the most suitable paths of care.

The flip side of walking this road of special physical needs with my daughters is that I am now, rather by default, ultra-sensitive to the many varieties of invisible wounds that plague the people of God. Certainly there are physical pains that our eyes alone cannot detect. But debilitating hurt emerges in many forms. Job loss hurts. Depression hurts. Grief hurts. Severed relationships hurt. Scary diagnoses hurt. Dreaded treatments hurt. Dementia hurts. Loss of ability hurts. Loneliness hurts—and this list represents just a slim cross-section of the hurts we might otherwise ignore because they are seldom on display. As a minister who wishes I could take all the hurt away, I’m often stunned by the platitudes that get heaped upon invisible wounds as if they are not as real as their counterpart physical ones.

When Jesus appears to Thomas, he invites Thomas to touch his visible wounds. While I think Thomas gets a bad rap (isn’t it unfortunate that he gets saddled with the descriptor “Doubting” like it’s his first name?), I can’t help but wonder about the invisible wounds. Was Jesus disappointed that his friends had deserted him? Hurt that he’d been betrayed and denied? Sad that visible, touchable wounds were necessary to validate his resurrection? And what about Thomas? Was he feeling such immense grief over Jesus’s death that he just couldn’t bear the thought of getting hurt again if the rumors of Jesus’s resurrection weren’t true?

As mothers and as ministers who want more than the world to take all the pain away, let us tend to God’s people this Eastertide with their invisible wounds in our hearts and the words of Jesus ringing in our ears: “Blessed are those who have not seen and yet have come to believe.” (John 20:29b)

Austin Crenshaw Shelley serves as the Associate Pastor for Christian Education at the Presbyterian Church of Chestnut Hill in Philadelphia, PA. As a children’s minister and mother of three children, she often wonders and wanders.

My Friend, the Mortician

A GIF From God
Scroll to top